If a picture's really worth a thousand words, I just might be able to make up for being such a bad blogger this year.  Besides, you'd much rather see the faces and costumes of RavenCon than hear me blather.  So, without further ado, thirteen photos from RavenCon 2013 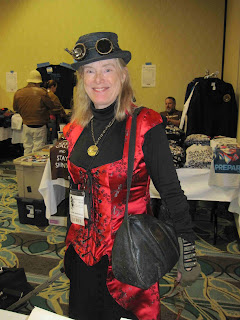 Author Laurel Anne Hill shows off a steampunk style perfectly suited to her story in the anthology Shanghai Steam. 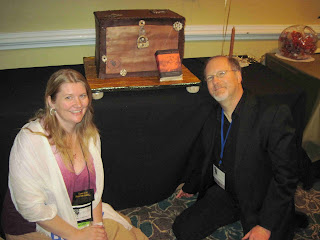 Fan Guest of Honor Carla Brindle and Writing Guest of Honor Kevin J. Anderson frame one of Carla's amazing cakes.  Since RavenCon flaunts Richmond's Edgar Allan Poe vibe, Carla baked a fully functional chest containing a beating cake heart. The book leaning next to it was edible, too.  And I can personally attest that it tasted great. 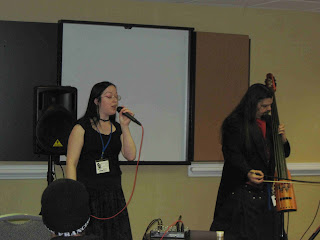 Sarah Black and Braxton Ballew of Valentine Wolfe perform their first concert of the weekend. 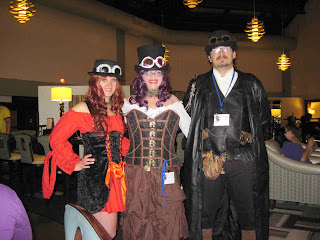 With Kevin J. Anderson and Rebecca Moesta as the con's Writer Guests of Honor, the costumes were guaranteed to glory in Steampunk. 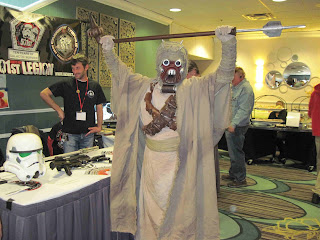 But Star Wars was well represented by the 501st Legion and this fierce Tusken Raider.  Star Trek sent Klingons...and a jail!  But you have to go to my Flickr page to see that. 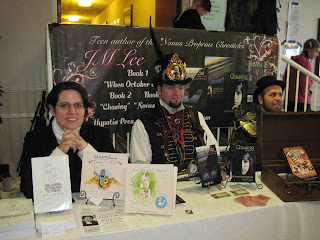 There were Steampunk writers, too. From left to right: Emilie Bush, David Lee and a guy I really think I ought to recognize... 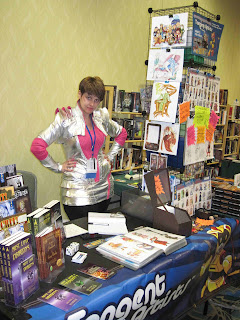 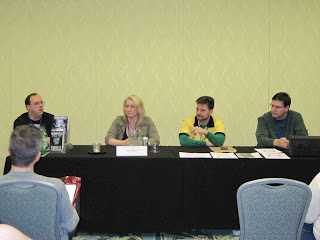 You knew there had to be at least one panel shot, didn't you?  Here (from left to right) Jim Bernheimer, Gail Z. Martin, Ron Garner and John Betancourt discuss professional self-publishing. 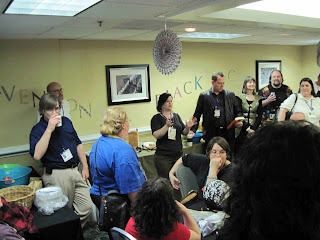 There were two book launch parties, but I only took still shots of Leona Wisoker's event. Here Leona (center in black) discusses the role of coffee in the party and in her new novel Fires of the Desert. 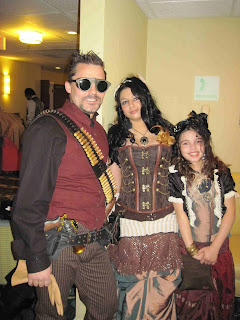 More Steampunk-y goodness. From some overheard conversation (in the bar, naturally) I understand this group later won the Masquerade. Alas, I didn't catch their names, but I do recall that it was the gentleman's first costume competition. 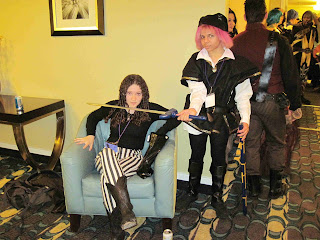 Don't tell anyone, but I can't identify these costumes--and I know I should! Sob. 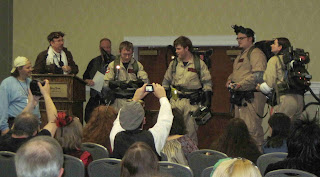 Masquerade Masters of Ceremony Billy Flynn (left in scarf) and Rich Sigfrit (to Billy's right) introduce the Ghostbusters of RavenCon. 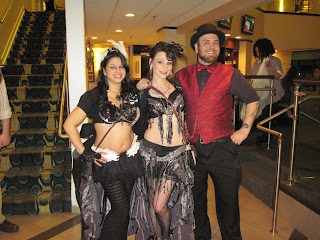 There were belly dancers, too.  And much, much more.  If you'd like a bigger taste, please, check out the rest of my pictures or follow the links from the RavenCon Facebook page.  It's not too early to sign up for 2014, after all.
###
Jean Marie Ward

Hi, I'm the female Ghostbuster in your picture. Feel free to look us up on Facebook at Ghostbusters, Virginia. Hope you enjoyed the convention!

Thanks! Your team was one of the highlights of the Masquerade. I'll check out your page as soon as Facebook lets me in.
In the meantime, I think I posted a few additional shots of the Ghostbusters on my Flickr page. The link was in the article.
Enjoy!