The Gap in your Library You Didn't Know You Had

It's been a loooooong year on this side of the screen staring at the cover for The Modern Fae's Guide to Surviving Humanity.

It isn't that I don't love the book--and "Fixed" my story in it.  I do.  There are scenes in that story that still make me giggle.  And I can't begin to describe my delight at sharing space in the table of contents with writers like Seanan McGuire, Barbara Ashford, Elizabeth Bear, Jay Lake and Jim C. Hines. But "Fixed" was my last story to to see print or pixels, and it was published in February 2012! 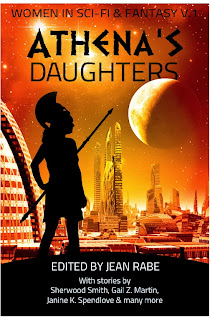 No, the fault lies with the vagaries of the publishing stars.  Anthologies that were supposed to appear in 2013 were pushed back to 2014.  Meanwhile, more recent stories have been slated for--you guessed it--2014 publication dates.

Finally, 2014 is almost here, and I can draw back the curtain on one of those projects, a story called "A Gap in the Fence" in the 2014 anthology Athena's Daughters from Silence in the Library Publishing. Yes, there will be an excerpt, but first I want to tell you about the project.

The participating authors include friend of Beyond the Veil Gail Z. Martin, multiple award-winner Mary Robinette Kowal, Danielle Ackley-McPhail, Sherwood Smith, Janine Spendlove, Vicki Johnson-Steger, Cynthia Ward (no relation that I know of, alas), and that other Ward girl--me!  Veteran editor and bestselling author Jean Rabe will be doing the editing honors (and she may even add one of her own wonderful stories).  Not only that, we're going to have a real, live astronaut writing our introduction: Colonel Pamela Melroy, USAF (Retired), the second woman to command a space shuttle!  How cool is that?

Almost as cool as the ideas behind Athena's Daughters.  The stories are all by women, about women, celebrating their strength at every phase of their lives, from ten to eighty.  Not just physical strength either, but all the ways women show their strength.  Wit and grit.  Determination.  Adaptability.  Empathy.  Courage in the face of overwhelming odds.

In addition, the anthology seeks to help women find their strength.  A portion of the of every book sold will go to the Rape, Abuse & Incest National Network (RAINN), the nation's largest anti-sexual violence organization.  RAINN created and operates the National Sexual Assault Hotline in partnership with more than 1,100 local rape crisis centers nationwide, and operates the DoD Safe Helpline for the Department of Defense.

Athena's Daughters also marks a publishing first for me.  This will be my first post-submission crowd-sourced project.  Silence in the Library doesn't solicit funding until they've assembled and readied a project for production.  As a result, the folks who contribute know what they're getting in advance.  They know the book will be published and can see how great it will be, because it's already almost done.  For a $5 pledge they are guaranteed an electronic copy in the format of their choice.  And it gets better from there!

As the stretch goals are reached, you get signed postcards and additional ebooks from the contributing authors--and the anthology adds more stories.  Bigger pledges net paper copies of the anthology (including a very special hardcover edition), Tuckerizations (a character named in your honor in one of the anthology's stories) and original art.  Yeah, art.  Did I mention every single story will have its own original illustration?

Not sure, yet?  Well, how about this: my story, "The Gap in the Fence" features two little girls, three special dogs, and one box-obsessed cat.  The jacket copy reads: "Ten-year-old Ana will do anything to save her best friend's dog from being put down--even braving the fairies who live behind the Gap in the Fence."

Finally, here's that excerpt I promised you:

The corners of the fairy’s eyes crinkled, like he was hiding a smile under his beard, but it didn’t last.  “Nothing like that.  I’m sorry.  I can’t stop anybody from dying.  There’re some things you just can’t fix.”
“Then what can you do?  There’s got to be something.”
All the birds and Gurt seemed to gasp at once.  Even the leaves seemed to hold their breath.  The man’s bushy eyebrows lifted.
“What do you want of me?”
His voice sounded different somehow.  It was still slow and gravelly, but there was something sharp and cold underneath the words that brought back all my fear.  Me and my big mouth—Mom always said it would get me in trouble.
He waited for me to say something, staring at me from under his eyebrows with eyes as hard as his voice.  “What do you want of me?”
A cloud passed overhead, shadowing his face.  Gurt ogled us with big saucer eyes.  Her head turned from side to side to keep us both in view.
What I wanted was for him to save Willy from dying, but he said he couldn’t.  At least I thought he did.  I wanted to be smarter, so I’d know what he meant and what I was supposed to say.  But this might be my only chance.  My head whirled with all the bad things about to happen—Willy dragged away from the people who loved him when he was sick and hurting, Shari waking up to find out her mom… I couldn’t finish the thought any more than I could face her and tell her what her mom was going to do.
“What.  Do.  You.  Want?”
The breeze roared into a wind.  My hair skinned away from my face.  Branches as big as my whole body shook.  The grass bowed flat.  The fairy hadn’t moved, but he seemed to have grown until he was too big to see without lifting my head.  I almost peed my pants, but I knew if I broke and ran, he’d be on me in a second.  Then I’d be dead.  There was only one thing to do.

Now you want that link, right?  It's the Athena's Daughters Kickstarter.  And we've got an astronaut!