I fell hard for Sudden Fall by Kally Jo Surbeck 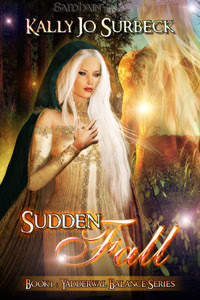 Hope you're all having a wonderful holiday season. Mine was made a little brighter by this book!

Hafwyen is the Princess of Yadderwal. However, royal blood is as much a curse as it is a blessing because she has to meet and bond with the mate of her soul before the end of her father's reign or her entire world will perish.

No pressure, right? Don't fret, though, because she's found him, if only in her dreams.

Hafwyen's not the ordinary type of princess kept stuffed away in an ivory tower waiting for her prince to come for her. Well, she is, but she escapes by learning how to go into dreams, or the Myst using a herbal potion that's just shy of being herectical. However, when she finally wakes up and figures out the man of her dreams might be closer to reality than she ever thought possible, it's almost too late.

Yestin has been waiting for Hafwyen to figure out he's real. He can't help her because his hands are tied by the gods. Unfortunately just when she meets an intriguing stranger who can tell her all about him, a dangerous enemy strikes at the very heart of the kingdom. Will she believe in time to save herself and Yadderwall?

Sudden Fall is filled with love, lore magic, dangerously complex court intrigue, and a legend that has a life of its own. The author has created a world that contains characters so vivid I found myself captured from the first page. I couldn’t stop reading until I found out what happened to Wyen and Yestin. Now I'm hooked and ready to be reeled in by the next installment in the series. If books where legend, lore and love collide is something you love, then do yourself a favor and get a copy of Yadderwal today!

Thank you! I'm so thrilled you enjoyed it. BB and happy reading.