It's the most wonderful (chocolate) time of the year 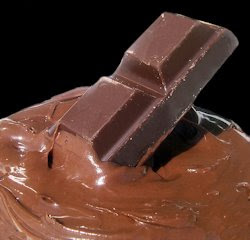 Or it will be on Monday—Easter Monday, my favorite day of the year. That’s the day Easter candy goes on sale for half price—marshmallow Peeps, crystal sugar diorama eggs and my personal favorite, dark chocolate bunnies. I’m getting all gooey just thinking about it.

Which is entirely appropriate considering chocolate’s reputation as an aphrodisiac. As with most edible sex aids, nobody’s quite sure how the connection between chocolate and sex arose, but it seems to have been there from the beginning. Both the Aztec goddess and Mayan god of fertility were associated with the cocoa tree and the beverage known as xocolatl.

The conquistadors who brought the drink home to Europe didn’t care about that. The beverage’s stimulating qualities (both in terms of its energizing effects and its ability to lubricate polite conversation) and its profit-making potential struck them far more important—not to mention allowed them to distance it from all that nasty human sacrifice stuff. Then came the glorious inventions of Joseph S. Fry (the first true chocolate bar) and Rodolphe Lindt (the process which transformed gritty chocolate into the luscious, lubricious Newtonian fluid it is today).

Modern scientists talk about the way the various compounds in chocolate affect mood and blood pressure. Personally, I think the answer’s a lot simpler, at least for those of us living in the chocolate paradise otherwise known as the 21st century. The stuff’s a feast for the senses.

It’s beautiful. Consider the divine darkness of semi-sweet, the friendly brown of milk chocolate and the glossy creaminess of the white. Consider the aroma. I think heaven must smell like the wind blowing just the right way through Hershey, PA. Then there’s the taste—complex, rich and oh so decadent—and its divine viscosity. So creamy. So begging for the faint tang of salt that comes from licking it off your lover’s skin. Chocolate-covered pretzels can’t even come close.

Then there’s Johnny Depp in Chocolat… That deserves a blog all to itself. ;-) But until I get to it, happy eating!
Posted by Jean Marie Ward at 12:06 AM

MMMMMMMM just reading your post had my mouth water.. I love chocolate..no no no I'm addicted to chocolate..
and true Johnny Depp's chocolat is amazing!!
Best thing is to eat chocolate and watch it :)