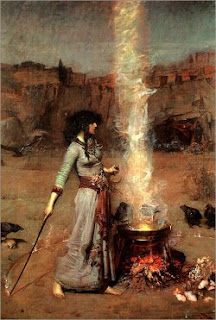 I'm not much of a pot stirrer when it comes to my online life. Generally, I sit back and watch the controversies pass by like miles on the highway of life. In my real life, I'd say it runs about 50/50, depending on the issue and if I feel strongly enough about it.

In my books - Katie bar the door!

Enter another manuscript (for those of you who don't know, I write multiple books at a time.)

This one I'm outlining longhand while sitting in my living room watching various documentaries on the History Channel. Now, this is a second book in a series. The first book had lots of gun fights, the third that I'm outlining at the same time, also has action, adventure and "Look out!!!" moments for my characters. Book two...not so much. For some reason that one- even in the outline - is turning into a more cerebral book. This is causing me moments of great frustration. I want there to be more action - unfortunately, the situation as it stands is not lending itself to the action I'm wanting in the book. Ughhhh.... this is a pot that wants to refuse to be stirred and I'm determined to work it with an egg beater if I have to.

Now, in my paranormals and the erotic-futuristic-fantasy romance I'm working on, I'm not really having that trouble. It's more like the same thing but in reverse. I'm stirring the pot too much. Giving my characters more to do than they can possibly accomplish in the word count alotted. I'm afraid the plot will run off the page. (I'm already siphoning the overflow into files for sequels.) It makes it hard to rein in the action when your heroes and heroines are hell-bent to kick some major villain ass.

I've considered that perhaps it's the different genres that is complicating matters. But then, no...that's not it. I haven't had trouble with kicking up dust in other books...just this one in particular. I've even plotted on a sheet of paper all the conflicts I have. There are at least six. So, it's not a lack of conflict or "the usual suspects" - so what is it? Have I not explored the villain enough and gotten quite far enough into his motivation? Hmmm...perhaps. Maybe I should give him the spoon for a while and see how much he can stir.

How do you like to stir things up in your books?

-Kat
Posted by Kathleen Scott/MK Mancos at 11:00 AM