The Interview with Death 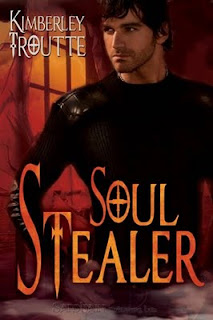 I am so excited to be here at Beyond the Veil where all the cool people hang out. (I’ll try to keep the squeeing to a sub-ear-drum-busting level). I’ve been banging on the door, begging to come to your party for ages. Maybe with the music playing you didn’t hear me knocking? Anyway, when that cute waiter with the front door keys in his pocket and that ginormous tray loaded with champagne flutes was tricked into, I mean, somehow found his way into, the hall closet…Let’s just say, I’m in. SQUEEE! You can call me by my code name, Kimberley Troutte, and I’ll call you by yours.

Being my first blog here, I wanted to do something special. My plan was to interview the characters from my novella, Soul Stealer, because I thought you might be curious about what’s happening on Main Street. I’m sure you’ve seen the unusual activity around the new homeless shelter. Yesterday, I wandered over there myself, but was a little creeped out by the demonic bodies lying in the street. I accidentally stepped on this dead gray rat-thing with wings and a long pointed tail. Ewww. Still creeps me out. Rumor has it that one guy is killing demons to protect a woman who’s hiding inside the shelter. After a little research, I found out that the woman is my friend, Sara Lane! I sent Sara a letter begging her to come out of there, but Sara claims that the guy (Cain somebody) is drop-dead gorgeous. The only way she is coming out is over her dead body. She promised to answer my interview questions, though, which should be arriving by messenger. Any second now…

“Woman, you can’t be serious.” Cain sat on the worn couch and propped his snake-skin boots up on the coffee table.

He frowned. “Not funny.”

Stepping over his legs, she sat on the edge of the coffee table and leaned toward him. “It’s just an interview for Beyond the Veil. Easy-peasy.”

Nothing with Sara Lane was ever easy. “Why for all that is holy did you agree to an interview? Demons are salivating right outside your door, hungry to rip the soul out of your body.”

His gaze travelled over that beautiful body of hers that stole the breath out of his chest. Her skin was tan and soft beneath her flowery sundress, her blond hair pulled back in a ponytail, smelled of tangerines and summer. Everything about her was fresh, vibrant, alive—for now. Sara Lane was living on the borrowed time he’d stolen for her. He should have killed her days ago.

“Come on, Cain. The author is a friend of mine. It’s her first time blogging at Beyond the Veil and she needs to make it good.” Sara rubbed his leg. “Please?”

“She’s not coming here. If we open the door for even a second—”

As if to prove the point, something big and scary smashed against the window. Sara screeched and flew into Cain’s arms and curled up like a scared kitten in his lap.

Cain held her tight and whispered, “I won’t let them get you, Sara.”

In his heart, he knew he was lying. He wouldn’t be able to keep her safe forever, maybe not even for the rest of the night. A fight worse than Armageddon was coming straight for them and when it did, he would battle with all that he had, all that he was. But he was one man against the Powers That Be. He would lose. And when they took her from him, he would be deader than dead. Sure, his heart would still beat in his chest and he would go on, but he wouldn’t be alive, not without her.

They were both living on borrowed time.

Demons, the size of gray possums with wings flew into the windows and banged against the door. Sara coiled her arms around Cain’s neck and hung on for dear life.

“I won’t let you take her!” Cain yelled toward the door.

After a long moment of silence, Sara exhaled softly against his neck. “Are they gone?”

“Good. We can do the interview while it’s quiet. Kimberley sent me the questions earlier so we don’t need to open the door.”

He pulled back and looked into those sparkling blue eyes and knew he was a goner. There was no saying “no” to this woman. “Tell me why it’s so important.”

“Because I want people to know us, Cain. Why we broke all the rules. Why I love you so much.”

His heart twisted with grief. She loved him? “People don’t want to know me, Sara. They never have.”

“This will help us. If we can’t get the shelter finished before I…I”—she couldn’t form the words—“…am not around, I want people to understand that the homeless shelter is important. If Kimberley gets the word out, the jerks down at City Hall will have to finish it. I need this Cain.”

“I know.” He combed his fingers through his hair. “What’s the first question?”

Sara got up and retrieved a stack of papers off the countertop. She skimmed the questions. “Oh, it’s an easy two-parter. ‘Who are you, and what is your occupation?’”

Cain rolled his eyes. Nothing was ever easy with Sara Lane. “My name is Cain. No last name. If you say that my brother was Abel and my mother, Eve, no one will believe you. Your friend will be booted out of her blogging job for being a lunatic. Do you want that?”

“No. We’ll just say your name is Cain. Occupation?” The smile fell off Sara’s pretty face.

“You know I can’t say that I’m Death—the guy who stops hearts and stands sentry while a person’s soul is ripped from their body. I am the thing all living creatures fear. Every. Single. One.”

He grinned. “Or an outlaw.”

Sara read on, “How did you two meet?”

Cain cocked his head. “You want to answer that one?”

“Can’t. How can I possible say that you killed me with a kiss?”

He pulled her down onto his lap. “Don’t forget the part about how I risked everything to steal your soul back so you could finish the shelter. The readers might enjoy the irony of Death being the one man who keeps you alive.”

Palming his cheeks, she gazed deeply into his eyes. “I won’t forget you. No matter what.”

He pressed his lips to hers drinking her in like she was the last glass of water on earth. All of his grief, love, longing poured into that kiss. He prayed it wouldn’t be their last.

Against his lips she whispered. “Forget the interview. We’ve got more important things to do with our time.”

*
Kimberley Troutte is still waiting for that interview. Soul Stealer is available now from Samhain Publishing.

www.kimberleytroutte.com
Posted by Kimberley Troutte at 12:01 AM

Do you enjoy the job you do and how do you cope with "job burnout?"

Hello, sadangel.
Interesting name you have there. I know a few angels, myself. Some of them are quite sad, as a matter of fact, but that is not why you have come here.

I hate my job. Always have. I am the last horrible vision any living thing sees before their heart stop for eternity. No one could honestly enjoy killing people, things, plants, enerything day-in-day out.

But death is a price for life. There's always a price. I'm paying mine for killing my brother--the greatest sin a man could commit (of course I didn't understand what death was the day I struck Abel). Job burnout? It's more like sheer unadultrated hatred, but it's my price. My job. And I do it well.

My advice is to seek and find your happiness and really live, before I show up on your doorstep.

Cain (Death) is emailing his answers to me. So if you have a question for Death, leave one here and I'll try to get him to answer.

Welcome to the party, Kim, Sara & Cain. Help yourselves to the champagne...if it's in keeping with the situation. ;-) Try to be gentle with the waiter, though. In his last job, they forced him to wear a red shirt.
Cheers and smiles,

I love it here. So sorry about the waiter. I did go back and unlock, I mean, check the hall closet. The waiter didn't seem too upset, except about the red shirt thing. He's still grumbling about that.

Cain did say he'd continue to take questions (in between the demon smashing) if anyone has anything they'd like to know.