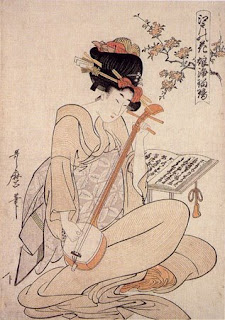 There’s no place like home--when your home happens to be Washington, DC. For all its faults--and they are legion, especially when the world’s most beautiful spring gives way to the world’s nastiest summer--there’s seldom a good reason to leave. Pick a spot, stand still long enough, and sooner or later the whole world will pass your way.

And you don’t have to pay a nickel for the show.

This time of year we indulge in a passion Washingtonians share with the Japanese: cherry blossoms. Our National Cherry Blossom Festival--the biggest outside Japan--features a parade with beauty queens and Muppets, cultural performances at the Tidal Basin, and a street fair with food, arts and crafts, and live performances (including J-Pop).

But that’s not all. Thanks to the Japanese Information and Culture Center (JICC), an office of the Japanese embassy, you can get up close and personal with some of the more unique featured performers.

On April 11, the JICC hosted two programs of traditional geisha dance and music from Tokyo’s Shimbashi district in their small auditorium. To honor the performers and please their American audience, the organizers allowed the singers and instrumentalists to share the stage with the four dancers. But in all other respects the dances followed geisha tradition, including the use of women to play men’s roles--the opposite of Kabuki.

The performers played two sets, each preceded by an introduction which shared such interesting trivia as how to tell the “boys” from the “girls” (the women playing men wore shorter kimono and fewer pins in their hair) and a little bit about each dance. Since I don’t understand Japanese, I couldn’t always connect the introduction and the individual dances. But it didn’t matter. I was perfectly happy to drool over the visuals. Their fan work was particularly dazzling, and I may be one of the three people on this side of the Pacific who actually likes shamisen music.

Afterwards, the performers posed for photos with audience members who were bright enough to bring cameras and camera phones. I didn’t, and I’ll be kicking myself for years. Americans seldom get the opportunity to see a full performance of traditional geisha dance performed in an intimate setting, and it’s not just a matter of mileage.

Because so few geisha remain (Wikipedia estimates their number between at under two thousand), their performances are usually limited to ozashiki parties, where the entertainment alone costs $350 per guest. And it’s just entertainment folks. Forget the World War II idea that geisha girl equals prostitute. Geisha are the top of the line as far as party entertainment goes. The ability to hire a geisha for your party is a mark of status more likely to earn you a polite thank you from the governor’s wife than a mention in Drudge Report.

I’d love to go to Japan and see geisha perform after a traditional kaiseki meal, while I sip the sake equivalent of single malt Scotch. But short of winning the lottery, I don’t see that happening any time soon. So I’m very grateful for the bennies that come from living a cosmopolitan city like Washington. 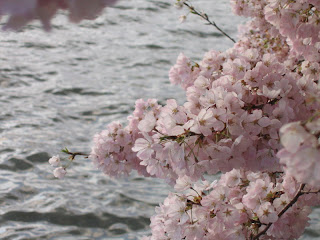 I’m also intrigued by the possibilities they present to a writer of fantasy. Are dancers, singers and shamisen players the only imports attending our Cherry Blossom Festival? What about the yokai and other supernatural creatures stowed away in their luggage? They don’t necessarily register on airport scanners. And who’s to say that all of them went home after the party’s over?
Not me, that’s for sure.

Ahhhh, the last time we visited DC, the cherry blossoms were in full bloom. The Tidal Basin is indeed the most magical place to be at that time :)

Never been to DC, but I have seen pictures. We don't get an actual
Spring down here, in Louisiana, just a tiny window of cool weather that soon gives way to a looooonnng hot muggy Summer which usually lasts til oh bout ..um, well, I'll let yall know when it ends. LOL!

And people wonder why I prefer to VISIT Louisiana. :-) But boy, do I love to visit! Cheers and smiles, Jean Marie