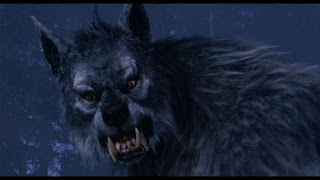 I’m sure by now we’ve all heard about some of the origins of werewolves and lycanthropy. That whole moldy wheat scare in the Middle Ages that convinced some people they were wolves. Hey, did you know that Ergot is one of the base ingredients in LSD? Yeah, I’d hallucinate, too. That theory is actually pretty far out there. There’s no scientific, physiological basis for lycanthropy, which is derived from the Greek for lycos (wolf) and anthropos (man).

But aside from food poisoning or mental illness, how did the tales of men becoming wolves begin? That’s difficult to track. Humans and wolves have had intimate connections throughout history. Witness the tale of Romulus and Remus, raised by a she-wolf. Greek mythology gives us the story of Lycæon, who was cursed into a wolf’s form after serving Zeus a dish of human meat.

Stories of werewolves abound primarily in Europe and most of them are evil. No. Not just evil, but eeeeeeeeeevil. Malevolent witchcraft and grave mortal sin surround those who succumb to the wolf. For some, the change is involuntary, the result of a curse laid on them. For some, however, it’s a perfect cover for serial murder.

Not quite a werewolf tale because there’s no hint of human transformation, the story of the Beast of Gévaudan tells of over 80 deaths in south-central France during the 18th century. The attacks are attributed to a monstrous wolf-like creature.

Seventh sons, sorcerers, drinking water from a wolf’s paw print, or wearing a belt made from a wolf’s hide are often noted as methods of becoming a werewolf. Also being a Christmas Eve baby in Russia, or certainly having parents who are werewolves will increase your chances of turning furry in the moonlight. Being bitten by a werewolf is a modern-day fiction, rarely found in older, more traditional legends.

The one exception in the old stories where werewolves aren’t pure evil comes from a 1692 trial of an elderly Livonian man named Thiess. Almost all the references I’ve found to this story seem to be direct copies of the information on Wikipedia, so take it with a gigantic salt lick. Anyway, Thiess claimed that werewolves were actually the “Hounds of God” – warriors who went down into Hell and did battle with the Devil and his minions. When they died, they were welcomed into Heaven for their services. He got ten lashes from the Inquisition for idolatry and superstition.

There are two medieval stories, both from around the same period, one French, one from Breton. The original story is probably Bisclavret, written by Marie de France in the 12th century, one of a dozen lais she wrote that were transformed into other tales. The Lay of Melion is Breton and relates to Arthur. In an earlier blog, I mentioned that Brittany has closer ties to Cornwall than France.

Bisclavret/Melion tells of a valiant and good knight who is married to a treacherous woman. The knight goes to hunt and the wife tricks him into revealing his secret. He’s actually a werewolf. From what I read, the stories don’t go into detail of how he became a lycanthrope. In Bisclavret, he needs to keep his clothing in a safe place or he can’t become human again. In Melion, there’s a magical ring that transforms him. As soon as the knight becomes a wolf and goes off to hunt, the wife steals the clothing (and in Melion, the ring, as well) and disappears. For years, then, the knight is condemned to wander as a beast of the forest.

Eventually, the king (Arthur, in Melion) goes out hunting and encounters this wolf. Melion/Bisclavret had been a friend of the king and goes to him in friendship. The king recognizes the strangeness of this and decides to keep the wolf as a companion. After some time, however, the estranged wife and her lover show up at the king’s court. The wolf goes mad, attacking the couple. In Bisclavret, he actually tears off her nose. The king, knowing that the wolf has never acted like this with anyone else, investigates and the evil-doers confess and tell where they’ve hidden the knight’s belongings. The wolf puts on his clothes and becomes human again. The wife and her lover are banished and in Bisclavret, all the wife’s children are born without noses.

The history of werewolves throughout the world is a gigantic study. Tales of lycanthropy differ from culture to culture and the modern version of werewolves differ significantly from the old horror stories. We’ve anthropomorphized them, made them more human and accessible. Indeed, we’ve made them heroes, but who can blame us? The ultimate alpha, that touch of animal lust. The shape shifter in all his forms is a romantic mystery we love to unravel.
Posted by Sela Carsen at 10:21 AM

Lots of good info there. I am using the Norse mythology to explain mine. Berserkers wearing the hides of wolves and possessed by the spirit of the wolf.

Those are great legends, Lia. I wanted to include a bunch of different ones, but it was getting long already!

I use some Norse mythology, and some made up stuff too. :)

Yeah. Because werewolves are totally not made up. ;) I'm using the medieval bit, so I kind of scootched the article that direction.