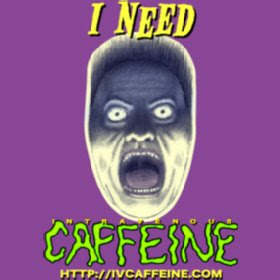 I don’t normally steal blog ideas from The Colbert Report, but this was too perfect: Too much caffeine will make you see ghosts.
Finally! A magic potion to make me psychic like the cool kids! And it’s legal. In fact, it’s already in my kitchen.
Wait a minute, it’s in my kitchen, I already drink enough tea (not to mention eat enough chocolate) to qualify for my own wing in the Caffeine Hall of Fame, and so far it hasn’t done anything except let me squeeze out a few more words on my project of the minute and inspire the name of the spouse person’s latest cartoon blog. It’s never helped me see any ghosts. I want my money back!
But I’m not going to get it. Turns out the original study never made a direct connection between caffeine and ghosts. What it said was caffeine seems to exaggerate the effects of cortisol, one of the brain chemicals associated with stress—and stress predisposes folks to visual hallucinations.
Dangerous stuff that. The ghosts I know wouldn’t take kindly to being called hallucinations. They’re people too, you know. Well, most of them. Among the various corporeally challenged critters in our neighborhood is a little gray and white ghost cat. Yes, people are more likely to catch sight of it when they’re tired or stressed, but that doesn’t appear to be a requirement.
Then there’s the whole visual thing. Just because I almost never see ghosts doesn’t mean they don’t interact with me. Take the ghost cat, for example. Occasionally, it jumps up on the bed and curls up on the comforter, just like our flesh and blood fur ball, except they never share. Believe me, there is very little quite as unnerving as waking in the dim pre-dawn to the press and pad of little cat feet atop the covers, only to realize our Lord of the Litterbox is sitting in the doorway, watching.
And cat—the real one—doesn’t use caffeine. Or get stressed. That's not how he rolls.
Sigh. Back to the drawing board.
Posted by Jean Marie Ward at 11:08 PM