A.K.A. How To Get It Smoky and Hot

Welcome to the latest Agent Double D.3 Report. Spring is over, Summer is well and truly on it’s way and the pool, patio and garden beckon with tendril fingers of peace and tranquility. You simply know this is the time of year for sitting outside watching the sunset, the stars, your lover’s mooning... It’s also the time to escape those regular chores of the kitchen and dump upon your hunky hunk the responsibility of providing the evening repast. Mainly through that tried and trusted method of heroic cooking passed down from manly man to manly man over centuries of masculine generations. But is he really qualified in haut BBQ cuisine? Does he know a patty from a party, a steak from a stake, or a kebab from a rehab?

Never fear, our special Agent Double D.3 has risked life, limb, food poisoning and smoke inhalation to bring you this exclusive report on how to assess your hero’s grill skill, so come on in and check it out now with Agent Double D.3’s special guide on Grilling Your Hero.


Do you think you could be a superspy?

If you believe you have the nerves of steel, a cutting edge mind and would like one of these nifty little ID badges. 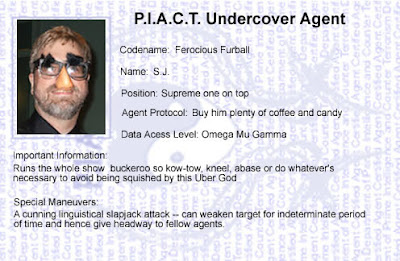 Then take a peek at this contest here.

In the meantime, let's head back for

1. Vampires: With this delicious hunk, grilling on the BBQ is something you need to approach cautiously. Firstly, most BBQ’s are done in the afternoon, full sunlight, bright and warm days. Something guaranteed to give your beau instant sunburn even before the first beer is popped. Then, if you go and mention you’ll be preparing stakes, I mean, steaks. Well, chances are you won’t be seeing your fella for a least a few centuries, if then. Best thing to do with this chipper lover is to go ahead and have your party while he’s hip deep in his beauty sleep. Then later, with a bottle of his favorite blood type handy, you can await, naked and smoking, for your after BBQ desserts.

2. Werewolves: We all know that werewolves are party animals, and what better way to party than to have barely cooked New York Strip while basking beside the pool in his new Hawaiian swim shorts. All you’ll need is salt, grill and loads of fresh meat, to stoke your beloved up and recharge him for a night of furrish delights. Hmm. Yes. Just one thing though. Avoid having a BBQ close to the full moon. Not that the damage would be permanent but, dammit, the only thing you want charred on the grill is the steak, and that fur is awfully flammable. Of course, if you’ve been wanting him to have that full body shave…

3. Ghosts: Mention BBQ to a ghost and he’ll probably be thinking of a five hundred pound pig slowly roasted over an open fire for, ooh, four or five days. Not that he’d think anything special about it anyway since that’s the way the kitchens always cooked in his day. Probably the best thing here is to quietly let him drone on about the banquets you know he used to hold in his old mansion, (when the French chef specially imported from Spain cooked that delicious Greek food.) Meanwhile set your brother, father, male friend up with the latest in portable gas gadgetry and get something decent on the grill. Trust me, there’s nothing more off-putting to a good pork chop than to see it staring at you with a soggy apple in its mouth.


4. Invisible men: Super scientific geniuses like invisible men are just simply terrific—except when it comes to cooking on the grill. Once they’ve managed to explain the simple processes of carbon/charcoal combustion, the increased rate of cancer forming agents in the cooked food and the resultant pollution to the atmosphere, we’ll finally get on to the relative merits of gas vs. charcoal and comprehensive design critiques as to which grill cooks best for what and where. Really, if you want a BBQ, just cook it yourself before he gets home. That way at least you’ll get to eat tonight.

5. Mermen: Overall mermen tend to be allergic to flame—something to do with having spent most of their time underwater. Still, if you throw them a good mackerel or salmon they tend to do a pretty nifty job in charring it to tender, tasty perfection. Oh, if you’re looking for a little after party teaser, don’t let them get too carried away with the water filled spray bottle. If it happens to blow the flame in their face, well, anyone for blackened fish…

6. Incubus: Okay I’ll only say this once. Put the Brats down and step away. I mean, it’s not like your incubus beloved has anything else on his mind, ever. So why give him ideas by presenting food to remind him of his favorite occupation. Hell, anything food-like will remind him of his favorite occupation. Just give up on it lass, take your clothes off, go to bed and wait for him there. You know you’ll end up there anyway so why waste the time? Just make sure to take a big tub of Godiva chocolate ice cream with you. You’re going to need some sustenance after all.

7. Djinn: Your Djinn lover will be the most inventive and excellent when it comes to grilling on the BBQ. Well, okay, so it won’t actually be him doing the cooking, but hey, if you can cast a spell and make a thousand servant slaves instantly appear and put on a feast fit for the Maharajah, wouldn’t you? So why complain, just pull up that gold plated chair, sit yourself down at the carved emerald table, and enjoy. Oh, make sure your hunk magics up a gas mask for you. Breathing the smoke from a hundred cooking fires can be hazardous to your health. Not to mention half the counties fire engines will probably be waiting outside...

Agent Double D.3 report ends.
Posted by sjwilling at 7:48 AM

Woo HOOOOO! Welcome back, SJ! Your BtV harem has been pining for you. ;)

Have missed a lot of folk, and have a lot of ground to make up alas.

But, hey, step by step the journey goes.

Oh, btw decided to rewrite your mission, so it will be a bit longer before its done. You're much more BKC this time around.