Three conferences in five weeks--and people wonder why I have no brain cells left. A lot of great memories. Tons of pictures. But no brain cells.

I still haven’t posted all of them on my Flickr page, but rather than do real work while I’m at a family wedding in Florida (and taking more pictures), I thought I’d give the readers of Beyond the Veil a sneak peek of the photos to come--and a good reason to start planning for the 2010 conference season.

First up is the Washington Romance Writers annual retreat, this year held in Leesburg VA, April 17-19. The featured speakers were P.C. Cast and Carla Neggers. 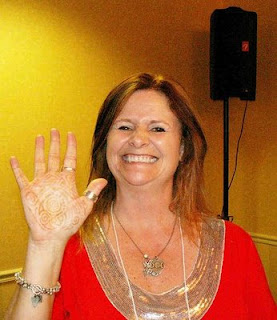 Here, P.C. gives new meaning to the phrase “Talk to the hand”. She also may have scarred one of the Hall’s waiters for life with her story of the centaur with, um, two. 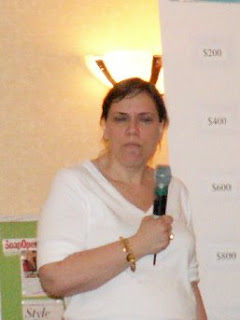 Always one of the conference highlights, this year’s Romance Jeopardy (which is NOT FAIR) featured a do-wop theme, including a group sing-along featuring writers Kathleen Gilles Seidel and Karen Smith, and St. Martin’s editor Jennifer Enderlin. This is probably the worst picture of Jennifer evah, but I knew she’d appreciate the combination of expression and horns.

Next up was RavenCon 2009. Richmond’s premier sf/fantasy con served up a big helping of Edgar Allan Poe in honor of the writer’s 200th birthday. But oddly enough, the con’s ghost in residence was nowhere in evidence in the RavenCon edition of the Dead Authors Society. 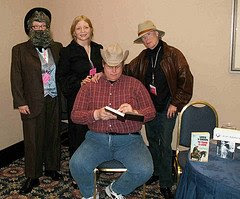 But we did put on a good show, with costumes and everything. The channelers were (from left to right) Lyn Gardner (as artist and fantasist William Morris), yours truly (as Mary Shelley), Peter Prellwitz (as Louis L’Amour, whose western novels inspired Gene Roddenberry) and Laurel Anne Hill (as David Gemmel). 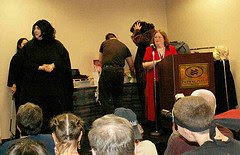 OK, I admit it, I haven’t read Harry Potter, but thanks to Luna-C, I’ve seen all seven books…in 45 minutes. No fooling. Of course, covering about a gazillion words in 45 minutes doesn’t leave a lot of room for frills. Here we see Snape snarking away, while fellow cast members change on stage for their next entrances.

If it’s Memorial Day, it must be Balticon, Baltimore’s long-running sf/fantasy con. Balticon is one of the most costume-rich conventions in the Mid-Atlantic region. It’s not just the Masquerade, but the dances and the LARP-ing too. 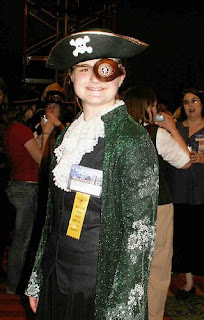 About that, I have only two words to say: steampunk pirate. This shot was taken at Dancing in the Gears, the con’s first steampunk ball. People were dancing quadrilles and promenades. I was too, thanks to a very nice man named Colin Wolfe, who partnered me in spite of my two left boots. (Thanks, Colin!) 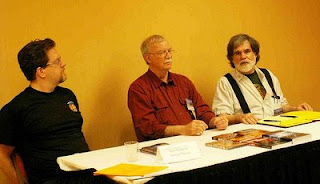 But it wasn’t all about the dressing up. There was a lot of good writing info too, including “Escaping the Death Spiral”, the only panel I managed to catch with Steve Miller (one half of the Liaden Universe writing team--unfortunately, Sharon Lee couldn't make it). No, the session--featuring Patrick Thomas (l), Marshall S. Thomas (no relation) and Miller (r)--wasn’t an intense technical discussion focusing on gravitational vortexes. It was about what to do when your current book sells less than your last.

Wait, as any writer will tell you, that IS a black hole…

Anyway, the panelists came up with some good ideas on how to keep moving your writing and your career forward. Most resonant for me was Miller’s advice--keep connected with the fans. With cons like these in my life, that isn't a job; it's a total pleasure.