Two Cons, One Reading and a Book Signing

So it isn’t Four Weddings and a Funeral. We have pictures. Lots and lots of pictures. And Charlaine Harris. And Rachel Caine. And Roxanne St. Claire. And… 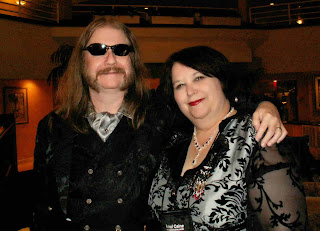 My 2010 convention season got off on a splendid start at RavenCon, April 9-11 in Richmond, Virginia. Two of this year’s guests of honor were artist R. Cat (left) and Rachel Caine, his wife and bestselling author of the Weather Warden and Morganville Vampire series. In addition to being totally great people, they’re totally into great clothes. Here Rachel works a wonderful, burn-out velvet top, while R. Cat displays his leather coat, vest and spiffy watch chain. 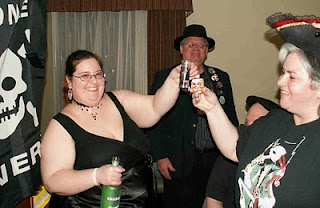 Last RavenCon, DragonMoon writer and editor Valerie Griswold-Ford (left, raising shooter glass) asked me to contribute a story to her magic pirate anthology. I did…four months late. Gulp. (What can I say? It was a really busy year.) Needless to say, I missed my deadline, big time. But Val let me attend the Rum and Runestones RavenCon launch party anyway. Lifting a skull to toast the new anthology is fellow writer/editor Danielle Ackley-McPhail. My story for Dani’s Dragon’s Lure, “Lord Bai’s Discovery”, did make the deadline and will be available in June. And all is not lost for that pirate story. If Rum and Runestones does well, Val is up for a sequel. 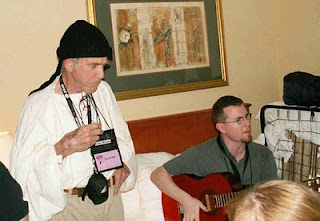 In addition to the rum (There must be rum!) the Rum and Runestones party featured filking by Danny Birt (right), a writer who made the deadline. 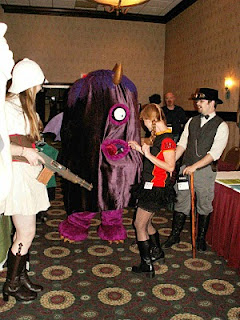 This year’s RavenCon did not host a Masquerade, though there numerous costume panels and wonderful hall costumes. My favorite was the One-Eyed, One-Horned, Flying Purple People Eater…even if I’m not too sure about that tongue. 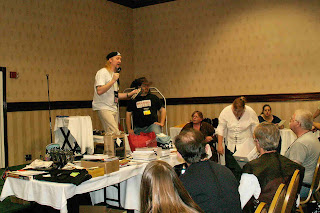 Conventions and conferences aren’t just tribal gatherings; they’re also an opportunity to do good, often through charity auctions such as the one held at this year’s RavenCon. Radio personality and fan favorite Kelly Lockhart (in the beret) and writer/editor Lee Martindale (seated, in brown) whipped the fans into a bidding frenzy. Together they raised $1000 for the Virginia Aviation Museum. 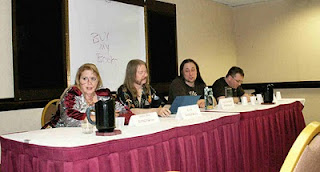 For me, the panel highlight was “Unusual Occurrences…Even for a Convention” late Saturday night, April 10. (From left to right) Master costumer and publisher Anita Allen, Artist Guest of Honor R. Cat, writer/editor Davey Beauchamp and writer Patrick A. Vanner recounted tales of con fans and guests behaving so badly, I couldn’t stop laughing, even when it hurt. Lesson to remember: try to behave at a conference. If you don’t, somebody will be taking notes. 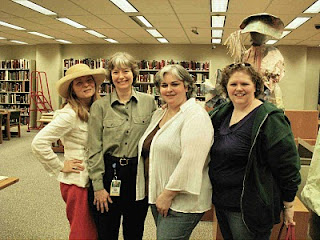 The day after I returned from Richmond, I headed to Washington, D.C., for a Broad Universe Rapid Fire Reading at the Library of Congress hosted by the Library’s Science Fiction and Fantasy Forum. I was so excited, it was hard to stand still enough to read “Lord Bai’s Discovery”. I mean, the Library of Congress—the high temple of writers everywhere. After the reading, we enjoyed a personalized tour of the Library’s Jefferson Building, the oldest of the Library of Congress buildings and, bar none, the most beautiful building in our nation’s capital. Here you see our hostess and tour guide Colleen Cahill (second from left), Danielle Ackley-McPhail and Samhain Publishing author Christine Norris (right). (I’m the one on the left in the hat.) Fellow reader Sarah Avery left before this photo was taken in the Library’s Map Reading Room. I chose this picture to highlight of one of the room’s Map Ladies—the other figure wearing a hat. Her clothes are made entirely of maps. 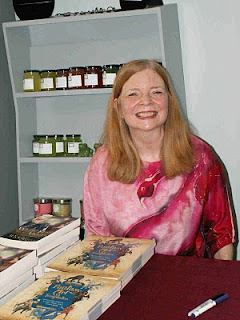 Here it’s just me—providing the proof I signed at the April 16 Turn the Page Bookstore Café mega-signing featuring Nora Roberts, Charlaine Harris and Roxanne St. Claire. My outpost of commerce was right in front of a bookcase loaded with jewelry and bath products, all lovely and all likely to tip over whenever I wriggled in my chair. Eep! But both With Nine You Get Vanyr and Fantasy Art Templates profited from the occasion. 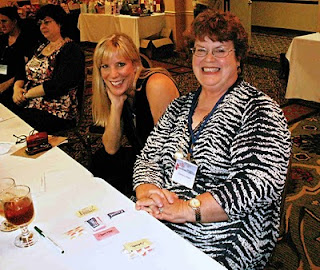 The Washington Romance Writers 2010 Retreat, held in Leesburg, Virginia, April 16-18, had great panels. But some of my best photos happened when I turned the camera away from the main event. Here I surprised featured guests Roxanne St. Claire (center) and Charlaine Harris (right) telling fortunes with the Sugar Packet Tarot during the Editor/Agent Panel, the evening of April 16. According to Rocki: “Your past tastes bitter, but your future has an equal chance of being sweet.” 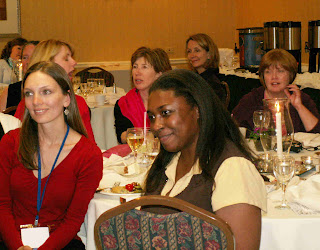 This year Romance Writers of America president Michelle Monkou (center) received the chapter’s Nancy Richards-Akers Mentoring Award, April 17. Aptly enough Michelle, shown here as the award citation is read, was WRW president when the award was created. This is one of those times when con synchronicity cannot be ignored. Exactly one week before, I was sitting in the audience of a panel where fantasy writer Lawrence Watt-Evans praised the career-nurturing efforts of RWA and its local chapters. 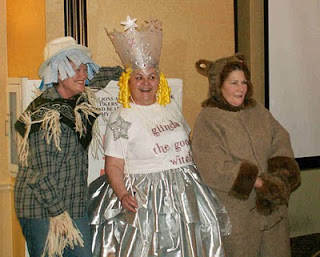 Of course, sometimes the main event should not be ignored, especially when it’s Romance Jeopardy, which is NOT FAIR. This ringleaders of this year’s game were Cathy Maxwell (Scarecrow), Karen Smith (Glinda the Good Witch) and Kathleen Gilles-Seidel (Cowardly Lion), who led contestants down the Yellow Brick Road and encouraged them to “Surrender, Dorothy!” 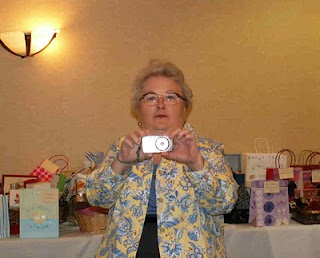 This year fellow Retreat photographer Julie Ray Stewart and I couldn’t resist capping the event by photographing each other. Julie has been recording Retreats since the conference was held in Harper’s Ferry, West Virginia.

That's it...for April. If you want to see the rest of the photos--and the rest of my con galleries--feel free to check out my Flickr page. You never know what mischief my camera will get into next.
Posted by Jean Marie Ward at 12:20 AM

Thank you for sharing. :)