All This & Glitter Too 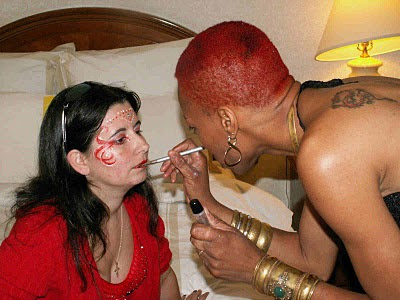 Sorry I’m late, but I only just washed off the glitter. Navigating Balticon 44, held May 28-31 at the Marriott Hunt Valley outside Baltimore, Maryland, was a lot like walking through showers of pixie dust. You didn’t quite wind up where you expected, but the trip sure was fun.

Forget panels not my own, dancing, the Masquerade, the invitation only single malt party. I set out for all of them, but as befits the “Escher Marriott” where “You can’t get there from here” is a fact of life, I instead wandered into conversations and situations that sent me in different directions entirely. 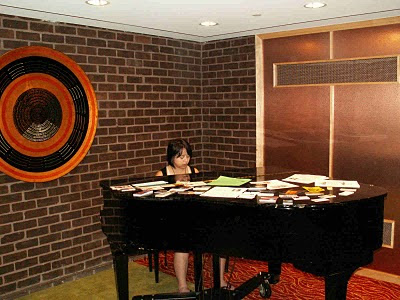 Turn any corner in the "Escher Marriott" and you might find something wonderful, like an accomplished pianist working through the opening bars of the score to Close Encounters of the Third Kind.

It started innocently enough with roomie Gail Z. Martin and Laura Anne Gilman in the bar eating lunch and drinking wine. Just one each, I swear. Gail and I were perfectly sober for her reading and my first panel of the con, “Are You Sure You Want to Go There?” where bloggers and podcasters Allison Duncan, Andrea Jennifer, Chris Lester, moderator Tee Morris and I talked about work arising from the darkest places in our nature. After that there was a party calling my name. But I was a good girl (I heard that snicker!), picking up my share of the cookies for the Broad Universe Rapid Fire Reading and changing into my steampunk outfit.

The crowd at this year’s RFR, hosted by Roxanne Bland, was twice the size of last year’s. And they liked us, they really liked us. Gail read from “Steer a Pale Course”, the story from Valerie Griswold-Ford’s anthology Rum and Runestones. Gail claims it was her first short story, but it sure didn’t sound like it. Danielle Ackley-McPhail’s reading also boasted a nautical theme. Elaine Corvidae shifted the emphasis toward the fae. Filker Roberta Rogow and newcomer Heather Kantz added their efforts. I followed up with a reading from “Syren Bridge”, my novella in progress, and reveled in an audience that laughed in all the right places. Then Kelly A. Harmon took the reader’s and gave me the nicest compliment of the con: “It’s really hard having to read after you.” 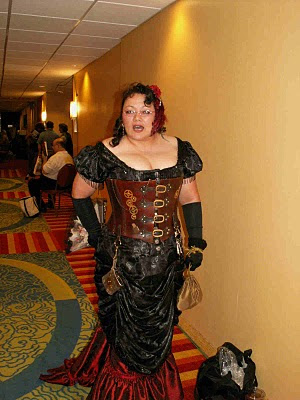 Rose of Night Shade Industries models one of her lovely steampunk
frocks. Yes, all the cogs on her corset are fully operational. And
Rose herself packs a mean flask of rum.

After that, I planned to head for Dancing in the Gears, Balticon’s fabulous steampunk ball. But Gail, Roxanne and I wound up in the bar, in the same exact booth Gail and I had occupied before. Judicious amounts of alcohol ensued. Alas, not of the single malt variety.

Saturday morning (morning—arrrrgh!) I shared a panel on “The Many Faces of Fantasy” with Misty Massey, Darrell Schweitzer, moderator Elwin Cotman and one of my all time favorite fantasy authors, Writer Guest of Honor Tanya Huff. I don’t think I babbled too much, at least Tanya kindly agreed to be interviewed for a nonfiction project I’m working on. 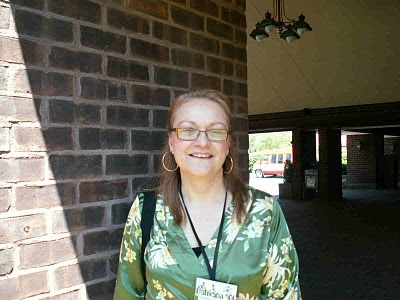 I had an entire list of panels lined up for the afternoon, but then I met fellow Red Rose authors Stephanie “Flash” Burke and Anthony Stevens. Flash was looking for a place to change for the Masquerade, so we wound up…

In the bar of course, where we met up with Rose of the amazing geared corset, her husband Dion, Stephanie’s husband Dennis and two gleeful refugees from Heroes and Villains, the Balticon Live Action Role Playing game. Stephanie and I stuck with tea of the non-alcoholic variety and five or six hours later we made it to our evening goals. 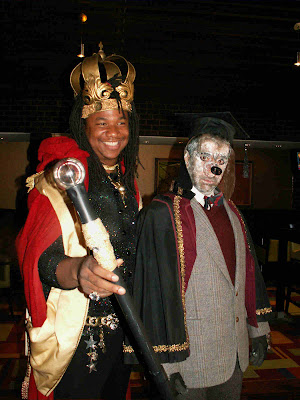 Heroes and Villains LARPers in the Marriott bar.

Stephanie went off to win Best-in-Show in the Masquerade’s Journeyman category for “Dem Boots”, which were largely created from a dismembered sofa. (No, I don’t make these things up—even if I didn’t get to record it on film. Check out Anthony’s photos, if you don’t believe me.) There was pixie dust involved in that, too. Stephanie and her costume were dusted in so much glitter, the shiny cloud settled on Masquerade MC and veteran vampire Marty Gear. He told her she was taking him to the cleaners. Literally. For the first time in...centuries, he needed to send his white tie and cape to a dry cleaner because, in his words, “There’s no such thing as a sparkly vampire.” 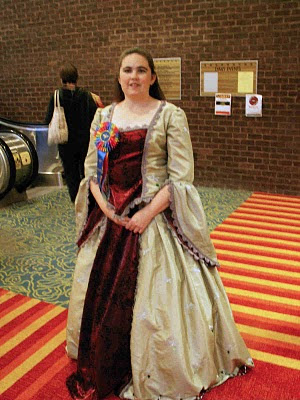 Oddly enough, it turned out I knew the other Journeyman winner, too. Jacalyn Stanley, who’s often graced Richmond’s RavenCon with her lovely costumes, won the Most Beautiful ribbon for her interpretation of Alexia Tarabotti from Soulless, the first novel of another Balticon attendee, Gail Carriger.

I meant to cover the Masquerade. I really did. The Baltimore Science Fiction Society has ties to some of the best costumers in Maryland, and even the non-competing walk-ons are fabulous. (If you don’t believe me, click here to see the awesomeness that was 2009’s Steampunk Star Wars.) But first I wanted to drop in at the Book Pushers Launch Party. There was wine, four great authors launching four wonderful books (Hard Magic by Laura Anne Gilman, Shade by Jeri Smith-Ready, Well of Sorrows by Joshua Palmatier writing as Benjamin Tate and Machinery of Light by David Williams), another fabulous author (Patricia Bray) staffing the bar, and a new item for the folklore database I like to carry in my head. 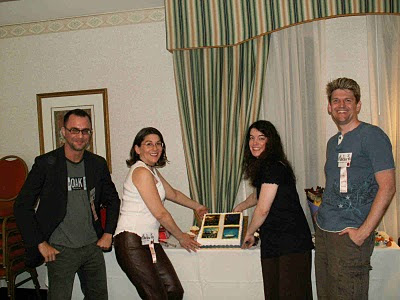 Laura Anne wouldn’t let anyone cut the cake until she carefully smeared the authors’ names on their frosted covers. “It’s bad luck to cut through a name,” she said. The lady knows her food lore. Now you know, too. (Don’t say I never share.)

I exited once to help someone who needed to get to the other side of the hotel, and found myself in the middle of an impromptu concert in the Ladies Room. Four members of the a cappella group Sassafrass were rehearsing for their Sunday evening performance…of songs about magic Vikings and Norse mythology. 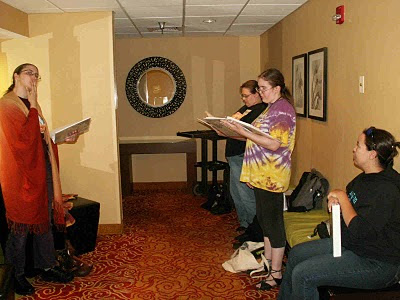 Four of the five members of Sassafrass rehearsing in the lobby Ladies Room.

Naturally, I had to bring back proof to the party, then somebody started talking book smack and I was lost. The room was still rocking when they came to kick us out at midnight. At least my Sunday panels had the decency to wait until 6 p.m.

But the prep did not. Stephanie was kind enough to give me the benefit of her mad costume and make-up skills. The Legendary Triple Launch, celebrating three new anthologies edited by Danielle (Bad-Ass Faeries 3: In All Their Glory, Dragon’s Lure and New Blood) was scheduled to start directly after my 6 p.m. panel. Since I was scheduled to read “Lord Bai’s Discovery”, my contribution to Dragon’s Lure, I felt I ought to fit into the fantasy of the occasion. I couldn’t manage a dragon, but thanks to Stephanie, I did pull off a rather extreme fox fairy. (Alas, pixels at dusk couldn’t capture the true purplage of the outfit, which was gloriously lurid.) 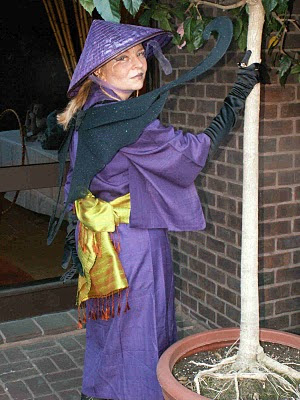 My first time as a fox fairy was also my first time wearing false
eyelashes. They had rhinestones. "Flash" truly outdid herself.

I also managed to catch Sassafrass killing off Baldur in song. It was every bit as splendid as promised in the rehearsal. I would’ve liked to hang around to hear the filk program which followed, but I was afraid I’d miss the Books & Braun reading by Tee and his fellow Dragon Moon author Philippa Ballantine. Tee had been making broad hints over the last few weeks that something momentous was in the offing, and I promised him I wouldn’t miss the big reveal. Besides, Jana Oliver (another Dragon Moon author who couldn’t make it to the con) threatened dire things if I didn’t keep her in the loop.

True to this con’s interesting rehearsal karma, I discovered Tee and Pip rehearsing their reading in one of the hotel’s two “piano nooks”. Even coming into the middle of the rehearsal, I was transfixed. 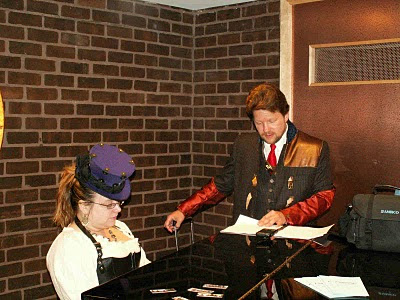 Philippa Ballantine and Tee Morris rehearsing their Books & Braun reading. No
piano playing involved--just the music of the words. It was more than enough.

There are times when the words in a story sing to you. It’s the truest kind of magic I know. Some inner sense tells you that this story or this novel will take off and fly. It’s never wrong, either. Most recently, I heard the music in the beta copy of Jana’s 2011 release, The Demon Trapper’s Daughter, I read a couple days before hitting the road for Balticon.

I heard it again in Books & Braun. Think a steampunk version of the 1960s Avengers with Patrick McNee and Dame Diana Rigg, with a little bit of The Librarian and a lot of New Zealand suffragettes (with ray-guns, naturally) thrown in. The fact that both Tee and Pip have wonderful voices and great chemistry didn’t hurt either. But the stop-start-shift nature of rehearsal negates much of the readers’ magic and throws it back on the words. Which were splendid.

It came as no surprise that Tee and Pip’s big news was a two-book contract. The book went to auction. Harper Collins SF/fantasy imprint EOS Books emerged the winner, and plans to release the book next summer, roughly one month after Spectre, Pip’s second solo book for Ace. Tee and Pip had been sitting on the news until they finished their 11 p.m. reading, and it had been driving them crazy. By the time they popped the champagne, they were the ones practically fizzing. 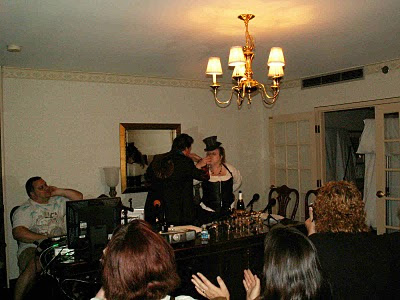 Tee Morris and Philippa Ballantine toast the sale fo Books & Braun to Harper
Collins EOS Books. If you want to see the follow-up kiss, you'll need to check out
my Flickr gallery.

Everyone in the packed room was right there with them, too. There’s not much better in the worlds of writing and fandom than watching people who’ve worked hard and paid their dues for years finally come into their own.

There was just one downside. By the time we finished cheering and toasting, the bar had closed. It was wrong and terrible, but part of me understands.

There was so much pixie dust flying around, they would've had to send the whole place to the cleaners.

For more Balticon photos and notes--including shots of the two Gails (Martin and Carriger), Keith R. A. DeCandido, Misty Massey, the Legendary Triple Launch and much, much more, please, check out my Balticon 2010 gallery on Flickr. Enjoy!
Posted by Jean Marie Ward at 12:51 PM

I SOOOOOO need a cloning machine!!! What a BLAST!! Your Fox Faery is fundamentally fabulous - and just WOW!!! :) So happy everything went so wonderfully and the reading was packed!

Doesn't matter what con it is, all roads lead to the bar! LOL Fabulous report, JM. There's a link missing, though, where you said "If you don’t believe me, click here to see the awesomeness". :)

Trisha, *drool* We'll have to work on finding that cheddar and Scotch at ReConStruction or DragonCon. Meanwhile, glad you liked the photos.
Carolan, I knew I'd, ahem, missed a link somewhere. Thanks for pointing out which one. It's fixed now.
Smiles to all,

You called my costumes beautiful. This means you are made of AWESOME STUFF! I <3 You. I'd never have found this if my husband hadn't actually been searching me under my real name. Anyway, you MADE MY DAY! I love love love love you! Oh and the rest of the entry was great, too. :)