The Hiatus is Over 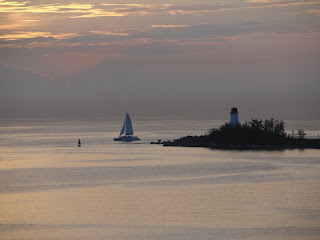 I haven't written much this summer and its been both a blessing and well, a little disturbing for me.
First of all the blessing. My husband and I were absolutely blessed to be able to take two cruises this summer and we thoroughly enjoyed both of them. Its something we've never been able to do before--go on two luxurious vacations--and probably won't do for a very long time again.
But that meant I had to stop writing for a bit. So I took five weeks off my writing. The only thing I can compare this to is drugs. Not that I've ever been addicted to any sort of drugs. Well, except that time in college when I was just a teeny bit addicted to Nyquil and couldn't sleep without it (but I kicked that habit, I swear!).
So I knew I'd have to stop writing a few days before we left on trip #1 and for weeks before I wrote furiously, trying to finish the novel I'd been working on because I didn't want to interrupt the flow. Other writers know that when you're in the "zone", breaking out of it, then trying to get back into it is very, very hard. So I wrote like a fiend.
Then I stopped.
Cold turkey.
I thought I could do it. I thought it wouldn't be a big deal to stop writing.
I was wrong.
It was very strange, knowing I wasn't going to write. I'd wander around the house, a little--no, a lot--lost. At loose ends. Sort of like a brown, curled leaf, caught in a summer breeze. I'd flit here. I'd flit there. My mind couldn't focus. And I felt anxious. Nervous. I'd look longingly at my computer, my fingers twitching. Then yank my gaze away and try to concentrate on packing and the million other things I had to do.
Stories flirted with each other inside my head. Characters talked to me. Voices tried to coax me back to the computer.
I felt like I lost a part of myself.
By the time we left for the trip, I didn't give my computer, or my characters, a second thought. In fact, on the trip I rarely thought about my writing which is weird because I always think about my writing.
I returned, glanced at my laptop, then dismissed it. I had three weeks before I was leaving again. No sense in getting entrenched in another story when I'd just have to leave it again. I read books, watched TV. Every once in a while I felt a little lost. Like I had too much time on my hands and had no idea how to fill it.
We went on our second trip. I thought a lot more about my stories. One in particular kept nagging at me because it was partially set in the Caribbean, where I was vacationing. I realized I'd made some mistakes in describing an island and decided I'd have to change the location altogether.
Then I returned, looked at my laptop, and walked away from it. For two days I avoided it. But like the drug that it is, my writing kept calling to me until eventually I sat down, opened up my current work in progress and breathed a sigh of relief.
Yes.
This is where I am supposed to be, sitting here, typing words that will eventually form characters who will become real people in my mind. Stories that will take you away from your life.
And like the drug that it is, my stories have a firm hold on me once again.
But unlike being addicted to a drug, I'm happy where I am. Happy to be "home" in my mind, with the people I've invented who are very, very real.
After five weeks, I'm back!
ps - the above photo is a picture I took of Nassau, Bahamas while on my hiatus
Posted by Sharon Cullen at 8:00 AM

Good to have you back, dearest. :) My Mom, sister and I were going to do a cruise this summer but it never panned out. :( I've done one through the Inside Passage Alaska but that's it. To be honest I got a little claustrophobic and was glad we'd upgraded to a balcony cabin. On the days we were at sea that ship was crowded!