Deceptions of Night by Virginia Cavanaugh

Hello Everyone!
Thanks so much to Beyond The Veil contributors, for allowing me to guest blog here today.
Today I’m here to tell you about Deceptions of Night, book two in the Order of Night series.  This book was interesting to write from start to finish.  The hero, Lex, is very willful, and I had to forcefully steer him back on course a few times.  But there were times that I let him have his way, which in the end gave me some wonderful scenes that were not in the original plot outline.
Here is the blurb and an excerpt from Deceptions of Night. 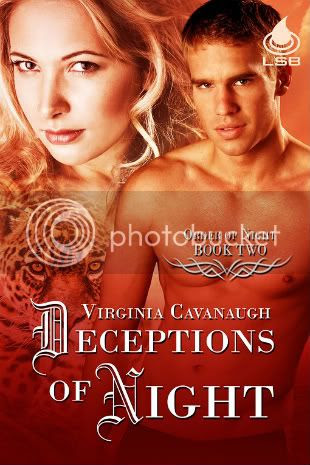 Blurb
Tempers run hot through the members of the Order of Night as Lex tries to settle in as the new Triad vampire.  But when a jaguar attacks him in his bed, his life gets turned upside down, and he discovers a new meaning to keeping your friends close and your enemies closer.
Kill the triad vampire or your brother dies.  Shayla grudgingly accepts the assignment.  But she soon realizes that success is easier said than done as she lies prone, trapped against the floor and secured by the body of one pissed off sexy leech.
The enemy of my enemy is my friend.  Lex wants answers, and Shayla wants her brother returned alive.  They form a shaky truce as they seek out the man who has both.  Fierce attraction pushes them closer as mistrust tears them apart.  Deception lays in wait around every corner as they struggle to find the mastermind behind the traitors to the Order of Night.  As the tension rises, desire begins to burn with an intensity that threatens to consume, leaving them to question whether they can find what they seek with their lives and hearts intact.
excerpt
Lex had just started to drift off to sleep when he heard a faint whisper of cloth. He remained in the large bed as he listened intently for any noise to follow. After a few minutes of silence, Lex had begun to wonder if he’d imagined the noise but then he heard the near silent footfalls approaching from the hall. He forced himself to keep his breaths regulated as he watched the door to the bedroom through lowered eyelids. Whoever thought to surprise him was about to be surprised instead. He’d been raring for a fight ever since leaving the meeting.
The door opened on well-oiled hinges as Lex willed his muscles to stay relaxed. There would be no giveaway of his readiness for the battle to come. He never thought he would be thankful for the heat, but as he lay on top of the covers that could have hindered him, he sent up a silent thank you. Everything moved in a flash after that.
A jaguar leaped through the air toward him, and he caught its front paws in a punishing grip at the last second as he rolled with it across the massive bed. They landed on the floor with the cat on top; both of them roared their displeasure. The cold hardwood pressed unyielding against his back as the damn cat preceded to claw wildly at his bare abdomen. He ground his teeth together as he tossed the jaguar away from him. With a forceful crack, the cat hit the dresser, but gained its feet quickly. The beast made for the door, and Lex jumped to his feet and gave pursuit. He wanted answers, and he’d be damned if he let the one carrying them get away.

Buy Link http://www.liquidsilverbooks.com/books/deceptionsofnight.htm
I hope you enjoyed this look into Deceptions of Night.  If you haven’t had a chance to check out the first book in the series, Secrets of Night, you can find it here: http://www.liquidsilverbooks.com/books/secretsofnight.htm
http://www.amazon.com/Secrets-Of-Night-ebook/dp/B004D9FZ4U/ref=sr_1_1?ie=UTF8&qid=1302969587&sr=8-1
http://www.fictionwise.com/ebooks/b116401/Secrets-Of-Night/Virginia-Cavanaugh/?si=0
http://www.allromanceebooks.com/product-secretsofnight-484352-139.html
Best Wishes,
Virginia Cavanaugh
Posted by Xakara at 12:00 AM