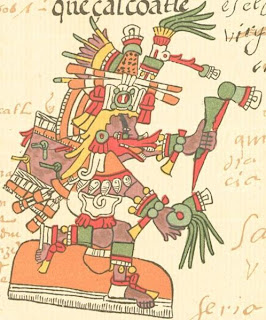 Wow. Kinda gives a whole new meaning to the corny joke, doesn’t it?

After man was created, twin hero gods, Hunahpu and Ixbalanque, had to go into the underworld to defeat the lords of Xibalba who reigned there. They perished and were miraculously reborn, thus proving the agricultural cycle of life that dominated Mayan culture.

The Mayan civilization was extremely complex – as evidenced by the fabulous cities they built, their societal sophistication and intricate studies of the sciences. Therefore, it’s no surprise that their mythology also has many aspects. It should also come as no surprise that these gods and myths also display logical order.

The Mayan gods maintain associations with each point of the compass, with a color and meaning assigned to that compass point, as well as maintaining a link to a central point. This central point was conceptualized by a world tree. Think back to our discussion of Nordic mythology – Odin hung from the tree Yggdrasil for 9 days and nights to gain knowledge. In Mayan culture, that tree is called the ceiba.

Perhaps the most well-known Mayan god is Kukulcan, the winged feather serpent, and a powerful creator god. He is also known as Quetzalcoatl in the Aztec pantheon.

I suppose here is as good a place as any to note that Mayan and Aztec cultures overlapped in many, many areas. Olmecs, Toltecs, Mixtecs are all variants and predecessors of the same Mesoamerican mythology.

Gods within these societies were assigned specific duties and portions. Chac was the benevolent rain and thunder, with accompanying applications in fertility and agriculture was a powerful figure. In fact, anthropologists have discovered that there are still pockets of Maya farmers – though nominally Christian – who still pray to Chac seasonally.

Yumil Kaxob was the god of Maize, eternally youthful. However, he had very little intrinsic power. He needed protection from Chac, but when Yah Puch, the god of the Underworld, brought drought and famine, Yumil Kaxob suffered.

All in all, a society devoted to harmony with the natural world, whether it was for celebration or suffering.

More information can be found at these websites:

This was so informative and inspiring Sela. Thanks!

Sela - What a co-winky-dink--I was doing some light research on an upcoming book and it was centered on Mexico and Central America, too.

Of course, it looks like your research was a bit more intellectual. I ended up watching a grainy video of a supposed witch flying above a Mexican cemetary :)

Thanks for commenting, Kelsey and Margo! Sorry I didn't answer earlier -- I've been on holiday.

Margo, there's a lot I didn't go into for this article. In another co-winky-dink, their death mythology bears many resemblances to tales of the Egyptian underworld!

What a wonderful post, Sela. I'm doing so much research for my Mayan Nights sequel, and you're really putting me back in the mood for it! And I have a huge glyph tattooed on my back LOL, seriously.

Mesoamerican scholar Enrique Florescano proposed long ago that the Maya Maize God, Hun Ahau, was a Maya version of Quetzalcoatl, the Plumed Serpent, who was worshiped and venerated as the planet Venus. According to stories recorded at the time of the Spanish Conquest, Quetzalcoatl created mankind and gave him fire and corn. Quetzalcoatl also invented the calendar and the rituals and feasts in which man would give sacrifice to the sacrificed sun in the underworld. This was why Quetzalcoatl gave mushrooms to humanity so that his children could enter the spirit world give sacrifice to the gods and communicate with ancestor spirits deified in heavens.


According to Fray Diego Duran...

“All the ceremonies and rites, building temples and alters and placing idols in them, fasting, going nude and sleeping…. on the floor, climbing mountains, to preach the law there, kissing the earth, eating it with one's fingers and blowing trumpets and conch shells and flutes on the great feast days-- all these emanated the ways of the holy man, Topilzin Quetzalcoatl”. (Duran, Book of the Gods, page 59)

For more on this subject visit mushroomstone.com