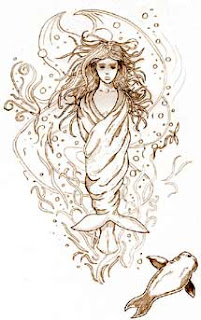 My latest release, HEART OF THE SEA, is based on an old myth about shape-shifting seals. The Orkney Isles in particular, lay claim to these stories. The word “seal” in the Orkney dialect is “selkie.”

The theme of the LOVE & LORE anthology is Celtic mythology, and there are Irish roots to my story, but the Heart of the Sea itself, the magical amulet on which the story hinges, goes all the way back to the ancient gods of the Northland.

It’s believed that the stories of the seal-people came from a source further north. In the north of Scandinavia, live a people called the Saami. They practiced the Old Norse ways longer than any of their Norwegian neighbors. The Orkney Isles were on a path the Saami used for trade and settlement and it was a legitimate part of Norway in the 13th century. Place names and dialect put Orkney closer to its Norse roots than its Scottish ones. Gray seals in the east Atlantic travel the same paths now, from the UK and Ireland up around the Orkney Islands, Iceland, Norway, and further.

Selkies are creatures of pure magic and the magic lies in their skin. They’re able to cast off their wondrous pelts and take form as humans. But if the skin is lost or stolen, then they’re stuck in human bodies until the skin is recovered. As soon as they find it again, they snatch up their fur covering and rush back to the sea.

Both selkie men and women are extremely attractive to humans. A common theme is when a human man sneaks off with a selkie woman’s sealskin. She’s trapped on land and has no choice but to marry the man who holds her pelt.

It often ends sadly, though. Many years pass and though she seems happy enough, she still longs for her watery home. It’s frequently her children who, by trying to cheer her up, tell her where the skin is hidden. She takes it back, bids farewell to her children, and returns to the sea, never to be seen again.

Happily, Heart of the Sea both begins and ends with the myth a bit backward. It’s the story of a human woman who turns into a selkie through a family curse and while she’s trapped in the body of a seal, longs for her home on dry land.

There are many retellings of this myth. I recommend Orkneyjar.com’s interesting pages about the heritage of the islands and the Selkie Folk. They have several different stories about Selkies. Another website is A Home for Selkies. They have quite a few poems and songs linked on their site. In addition, The Seal Prince, a children’s book by Sheila MacGill-Callahan is beautifully told and illustrated.

I also highly recommend the film, “The Secret of Roan Inish.” It’s a beautiful story within a story – framed by the Selkie myth.
Posted by Sela Carsen at 12:34 PM

Oh, I loved The Secret of Roan Inish. I'd almost forgotten about it. I'll have to get that for my daughter some day.

It was a really lovely film -- the setting was gorgeous.

Oh, and the MUSIC of "Secret of Roan Inish" is magical. :) For me, half the enjoyment of movies is in the soundtrack!

Have you heard Solas' rendition of the traditional song, "The Grey Selchie"? It's sad, and haunting:


In Norwa there sits a maid
"Byloo, my baby," she begins
"Little know I my child's father
For if land or sea he's living in"

Then there arose at her bed feet
A grumbly guest, I'm sure it was he
Saying, "Here am I, thy child's father
Although that I am not comely

Then he had taken a purse of gold
And he hath put it upon her knee
Saying, "Give to me my little wee son
And take thee up thy nurse's fee

Loath she did marry a gunner good
And a proud good gunner, I'm sure it was he
The very first shot that he did shoot
He killed the son and the gray selchie

In Norwa there sits a maid
"Byloo, my baby," she begins
"Little know I my child's father
For if land or sea he's living in"

Oh. :( That is sad, but as I said, these relationships never seem to end well. Thank goodness I get to tweak them so they do!