The Crown of Zeus...AT LAST! 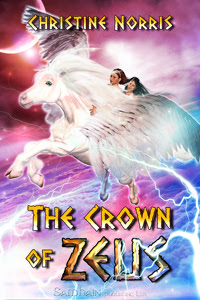 At long last, my first Samhain book is finally released! I am so proud and happy to see THE CROWN OF ZEUS come into the world.

What is this book about? It's about having to get a new life, making friends, girl power, mystery, adventure, fantasy and MAGIC. What would fantasy be without magic? This isn't the Harry Potter, wave-a-wand and make things happen magic. It's more the what happens when we inadvertently get sucked into someone else's left behind magic, uh, magic.

If you've heard of the Spiderwick Chronicles, which was recently made into a movie, I'd say that's more the kind of magic I'm talking about. But not. LOL. Because there are no goblins, or trolls, or anything like that. But the main characters, like the kids in Spiderwick, aren't magical, just ordinary kids that find themselves in a decidedly extraordinary situation.

I brewed this book, this series, with a few ingredients from my own literary childhood - a dash of Nancy Drew, a dab of mythology and folklore, a little Mixed-Up Files of Mrs. Basil E. Frankweiler - and little bits of more modern stuff; Lara Croft, Tomb Raider, DaVinci Code. I'll tell you that while I was writing THE CROWN OF ZEUS, "National Treasure" and "The Librarian: Quest for the Spear", the TV movie with Noah Wylie, appeared, which kind of weirded me out, because there were so many similarities between them and what I was writing. If there ever was an argument for Jung's collective consiousness, there it is.

But it's done and it's wonderful and after everything I still love it. My girls are ready to meet you, and I hope you'll take them in and love them like I do.


You can get the book HERE, and read an excerpt. If you'd like more, stop by my website. I'll be holding celebratory contests with cool prizes!
Posted by Christine Norris at 10:29 AM

Congratulations! I wish you much success with your release. Enjoy!

Hi Christine,
Congrats on your new release! This sounds like an interesting read.