I've never done a TT before, but I posted a Free Read on my website today and I wanted to let y'all know about it. My fellow BTVers told me to write a TT, so here goes.

1. RUNESPELL started out being called River Bear. I'm not so good with titles.

2. It was inspired by two things. The first is Robert Frost's poem, Fire and Ice:

Some say the world will end in fire,
Some say in ice.
From what I've tasted of desire
I hold with those who favor fire.
But if it had to perish twice,
I think I know enough of hate
To say that for destruction ice
Is also great
And would suffice.
~Robert Frost

3. The other inspiration was this piece of art. It's an illustration from a Scandinavian fairy tale called East of the Sun and West of the Moon. Kay Nielsen (1886 - 1957) was a Danish artist who worked in an Art Nouveau/Art Deco style during the "golden age of illustration." 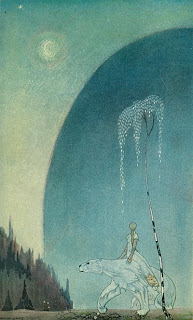 4. Favorite line: Then he simply lay awake, feeling her breathe next to him. A small gift. An immense responsibility.

5. I wrote this with the intention of polishing some of my writing skills. I wanted to see if I could write in a more lyrical, poetic voice than my usual casual, funny, contemp voice.

6. I also wanted to work on upping sexual tension in a story, without actually including any sex! Yep, the steamiest thing my characters do is kiss. But it's a doozie!

7. Another favorite line: So. This is what a paradigm shift feels like.

8. Another favorite line: His troll-bride lived.

9. I always feed people in my stories. Hey, if I'm hungry, they're hungry, right? So this time, the hero makes lefse, which is essentially a Norwegian tortilla -- a very thin flatbread/pancake made with potatoes. They sound delicious!

10. My baddie is named Huldra, which isn't actually a name so much as it is a noun. A huldra is a type of forest sprite, but not always so friendly.

11. I was also able to combine an element of another story idea I'd had sitting around forever. My fascination with runes began in a potential romantic suspense I called "Cold."

13. And my very favorite line of all: We get to live happily ever after.
Posted by Sela Carsen at 7:28 PM