Well, between my book release this past week, work, and having to drive my son two hours to spend the weekend with friends yesterday, Halloween kind of slipped by me. I didn't even have time to dig out my costume! Waah.

Never mind. My husband took up the slack. 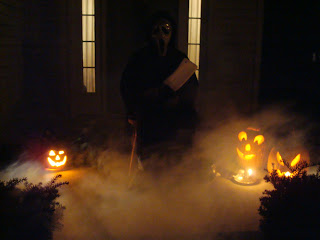 Mm hm. My knight in shining armor, gleefully scaring the snot out of small children. To his credit, he'd take the mask off for the littlest ones! (And some of the parents. LOL)

The conditions were perfect for the fog machine. We had it behind the bush on the left. The fog would kind of filter out of the bush then creep sloooooowly across the hard. Kewl. :)

I had my share of getting spooked when I dropped my son off to be picked up by his friends for the weekend. It was the first time he drove off in a car with three other boys, no parent at the wheel.

EEEEEK!! I think I just got three new grey hairs.

So who watched the live broadcast of Ghosthunters last night/this morning? I stayed with it until around midnight then my old-fart genes kicked in and I turned into a pumpkin. Who else found some of the celebrity guests and the international team annoying as hell? They were more interested in hearing themselves talk than actually doing their job.

The only exception was Amanda Tapping - at least she wasn't constantly flapping her jaw. The Brit, Steve, was a yacker but at least he knew how to handle a camera. Grant has never learned how to hold one steady. LOL

Carolan
www.carolanivey.com
Posted by Carolan Ivey at 8:36 AM