Other creatures of the night...

Besides the interesting Zombie trend Jody blogged about, there are other mythical monsters that have evolved over the years. My favorite being the ever-hairy, often misunderstood werewolf.

Werewolves have been part of human culture for centuries. It will come as no surprise that one of the original versions of Red Riding Hood involved a werewolf-type creature. Tales of shape shifters have been told since medieval times. In the past fifty years or so, furry shape-shifters have leapt from the pages of folk tales to be dramatized on the silver screen. At first, audiences were entertained with the rather cheesy representation of The Wolfman.

Even today's Halloween werewolf costumes closely resemble this original fuzzy-faced-fiend. And fiend he was -- a human being cursed to behave like an animal without conscience or will.


Later on, as movie magic became more sophisticated, we were shown a more gruesome transformation in the hit flick An American Werewolf in London. I'll admit the scene of the 'hero' changing -- very painfully -- into the monstrous half-man, half-wolf creature made me squirm. It looked and sounded grotesque. And again, a mindless villain was born.

I must say I prefer the new version of the were-hero. He isn't ugly. His transformation is often effortless and painless. As a wolf, he looks more like the majestic animal that has been so maligned over the years. Often, the werewolf can change at will and is not slave to the cycles of the moon. He's strong, powerful, fearless... and he makes a great romantic lead.

The were-heroine is rather cool, too. In Blood and Chocolate, it's the beautiful she-wolf that commands the screen. She's the one who defends her man. She becomes the leader of the pack. Yes, a very modern take on the whole fairytale -- but then we women aren't shrinking violets in distress anymore. 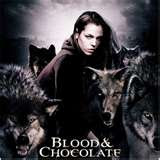 Indulge your senses...
www.megallisonauthor.com
Posted by Meg Allison at 10:01 AM