It’s my turn to blog today. I apologize to all the readers and the other blogging authors that I missed several of my last turns. It was probably my subconscious knowing I didn’t know what to talk about, LOL.

But, this time I do have something to talk about. The print version of one of my books is coming out October 1st. It's Midnight Rose, the second novel in The Watchers series.

Rosa Bella is a singer in an upscale nightclub. She’s used to fans admiring her talent, though one fan pushes his admiration too far. He has plans for her, ones that will change her life forever. Rosa has eyes for one man—Vane—but he has fans of his own. The Watcher, known as the Latin Lover, has women falling at his feet.

When Rosa’s psycho vamp admirer takes what he believes is his, Rosa wonders if her knight in shining armor will find her in time, that is if he searches for her at all.

Catch all the action in Midnight Rose – The Watchers, Book Two. Currently available in ebook download at http://www.mybookstoreandmore/. The first three of the series are also available.
Diane McEntire 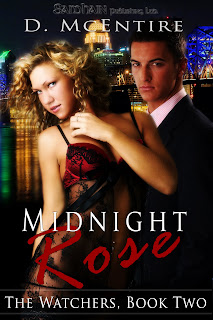 Posted by Diane McEntire at 6:53 AM