Keeping Ka and Ba Together 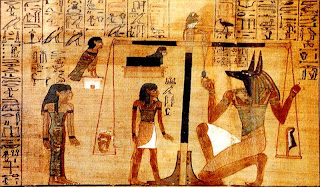 An earlier discussion on Ancient Egypt revolved around Ra – simply because I had to focus somewhere! Egyptian mythology is complex and vast and the fact is that most of it centers around the Afterlife.

These people were obsessed with Death.

A book which we call The Book of the Dead is actually the name for a large collection of ancient funerary texts. It contains instructions on all the details of death and steps for getting to The Field of Reeds, like the Greek Elysian Fields or the Christian Heaven – the reward for a good life. The Book was not a set in stone (Ha! A little Rosetta Stone humor), but could be individualized to each person who wished to obtain one. Spells and passwords unique to each bearer were included so that the dead person could pass through the afterlife.

Many funerary texts were translated by a Cornishman named E.A. Wallis Budge, including this Book of the Dead for the Scribe Ani.

They believed in an immortal soul. A soul which would be judged by its actions here on earth. But the soul in Egypt was a complicated thing, comprised of many different parts.

The Ba – the closest approximation is the Western idea of the soul. The a was a person’s personality. What made them unique.

The Ka – the life force. The difference between dead and alive is the Ka.

So when a person died, their Ka left their body. The Ba might remain trapped within unless priests performed certain spells to release it. When the Ka and Ba rejoined in the afterlife, they created a unique entity called the Akh. The Akh was the form in which the deceased occupied the afterlife. The true expression of the self, one might say.

Mummification was a vital part of the trip to the afterlife, so that the Ba and the Ka might recognize each other to form the Akh. More info here on burial rituals.

The journey of the soul in the afterlife includes a visit with Osiris, the king of the Underworld.

Quick aside: In the previous article, comments point to Anubis being the god of the Dead. In a spectacular bit of religious evolution, the legend of Osiris and Isis sprang up during the Middle Kingdom and by the New Kingdom, Osiris was the accepted leader in the Guide to Who’s Who in the Underworld.

In a related timeline, The Book of the Dead originates from funerary texts collected during the time of the New Kingdom. Hence, we deal with Osiris rather than Anubis.

Back on topic now.

After a person dies, they’re taken into the Hall of Two Truths. Thoth, the Divine Mediator, would read out the person’s deeds, then the heart would be weighed against the feather of Ma’at, the goddess of Justice.

If the heart was pure, the person could pass on to the realm of the blessed. If not, (I love this part – I’m just a wee bit bloodthirsty, it seems) Ammit, the Devourer of the Dead, would slither up from under the throne of Osiris, and eat the heart, condemning it to eternal restlessness. In some traditions, she didn’t eat the soul, but rather cast it into a fiery lake. Another example of religious synchronicity.

In any case, the amount of information about Ancient Egyptian death practices is enormous. Most of the sources I cited here are from Wikipedia, but also from the Encyclopedia Mythica and Ancient Mythology.com.

Egypt Art Site contains some excerpts from the Papyrus of Ani, plus a link to the Budge translation.

Finally, although the Egyptologist in “The Mummy” warns against it – for further information, I strongly suggest that you DO Read From the Book!
Posted by Sela Carsen at 9:40 AM

Very interesting, Sela. I like how the personality is separate from the life force. I'd never heard that before.

Definitely fodder for worldbuilding -- thanks!

There are actually five aspects of the soul, Carolan, but I decided to concentrate mostly on Ka, Ba and Akh. Didn't want to get bogged down in too many details for a quick blog post!

No problem, meankitty! Glad you enjoyed the post and hope it sparks some ideas for you.

Okay, now I'm REALLY hoping Carrie accepts my manuscript, because you would LOVE it - I actually have a scene in the chamber of Osiris, complete with scales and Ammut and Anubis and all that. The weighing of the heart comes into play!

(she said she's halfway through and 'so far so good')

Even if she doesn't I might just send the manuscript to you and let you read it for fun. Because you'd enjoy all the Egyptian afterlife goodness. It's a YA, so it's toned down a little, but still full of good stuff.

Oh, and there's a Book of the Dead too.

I love any mythology, Christine, and I know there are a lot of people out there who particularly love Egyptian mythology. I've had such fun writing these articles! Good luck with your ms!!