Things That Make You Go Eeek! 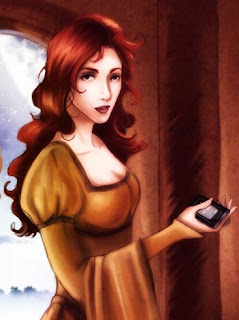 I’ve been spending a lot of time on the dark side lately. No, not Bianca D’Arc’s side--splendid though that is. I’m talking about the darker edge of fantasy.

At least, that’s what people tell me. The funny thing is I don’t see it quite that way.

My work in progress, for example, is a contemporary retelling of the myth of Orpheus in Eurydice in which I drag poor the poor woman, limping on a rattler-bitten leg, from the pleasures of the Elysian Fields through the Underworld of the New York subway system. Along the way, she faces off against killer zombies, sulfur-driven infernal engines, and a fine collection of monsters, ghosts and ghouls. And I call it a comedy.

Well, it is her story, and she does make out okay.

But that’s not all of the reason. It seems I define “dark” a little differently than the people who define the genre rules. “Dark” to me involves a high squick factor with lots of body parts dismembered on screen and nameless horrors mutating into swarms of ravenous but less than particular insects. Killer signs and ambulatory pigeons with no heads? Aw shucks, ma’am, that’s just local color.

At least it is in my part of Virginia.

Before you ask, no, I don’t live in the hill country. So you can put away your banjos and DVDs of Deliverance right now. I’m Urban Girl, through and through. If it doesn’t have pavement, I don’t know where to put my spike heels. Roughing it consists of a hotel without room service.

But strange things do abound even in the most civilized of places. Headless pigeons, for example. I met one on a walk along the bike path of our local part. I was lost in whatever daydream was playing through my head that October, not paying attention to where I was going until I nearly tripped over a bird body waddling slowly in my path. I stopped myself from stepping on it just in time.

That’s what caught my attention. The birds in my neighborhood are pretty fat and accustomed to hand-outs, but they blast off in a welter of flapping wings when something bigger than a squirrel threatens to fall on top of them. I looked down and realized the bird in front of me had no head, just a meat end of neck with a little bit of bone sticking out. Believe me, I checked all the telephone wires between there and the house, just in case something that didn’t know it was dead decided to get the drop on me.

Talking to my husband after I got home, I learned there are several well-documented cases of chickens living without heads for days, sometimes months. The most famous is Mike the Headless Chicken, who is honored every spring with his very own festival in Fruita, Colorado. Organizers call attending the festival “a no-brainer”, proving they share my mindless sense of humor as well as my affinity for stupid animal tricks.

The sign was, if anything, stranger than the pigeon. Imagine an underground parking garage in the middle of a sultry June night with no wind currents. None. It was sealed off from the outside by closed garage doors, and there was no air conditioning or venting to create currents in the concrete cavern. Yet there was this sign--an inch-thick metal plate three feet tall and as wide as a driveway, suspended on metal chains as wide as my wrist--doing a jig in the still, humid air. The metal screamed as it tried to tear itself from its moorings.

Eight years later, I still can’t offer any explanation for it. The people in the hotel connected to the garage had no clue. Local newspapers offered no tales of parking garage murders or desecrated cemeteries or Indian burial grounds. I’ve never found its equivalent on the ‘Net either. At least, I’ve never found anything with the kind of corroboration you find with stories of headless chickens.

No, I didn’t drive under the sign. I might be crazy enough to research headless birds and inquire politely of a hotel night clerk whether there’s a danger the hotel's signage might separate from its moorings. But I’m not quite stupid enough to drive under a shrieking sign.

Having survived both encounters undamaged, I find it hard to consider them dark. Weird, certainly. But not dark--at least, not necessarily. On the other hand, they provide great fodder for “what if” play. Consider, for example, what might happen if someone decided to hold a séance in a hotel parking garage. Or what kind of birds might populate the after life.

They also make it easy to explain why I write fantasy. Not that many people ask. The little ghost cat who shares our house usually takes care of that. I just wish it was a better mouser.
Posted by Jean Marie Ward at 10:54 AM

I'm traumatized by the headless pidgeon, but I agree that there's a different between dark and weird. I might not be the best judge of it, but the difference definitely exist. And the possibilities are endless from the weirdness life throws at us.

Hello. This post is likeable, and your blog is very interesting, congratulations :-). I will add in my blogroll =). If possible gives a last there on my blog, it is about the MP3 e MP4, I hope you enjoy. The address is http://mp3-mp4-brasil.blogspot.com. A hug.

Yeah, the weird is definitely out there. Witness our second responder. Cheers and grins, Jean Marie