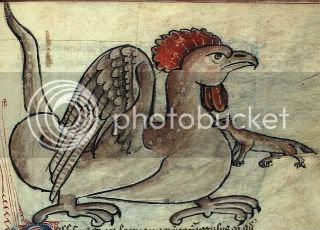 Do you know the difference between a cockatrice and a basilisk?
Ever heard of a Leocrota? Or an Anphivena?

Well, today is your first day of Bestiary 101.
Dude. Not bestiality. That’s just gross. Get your mind out of the gutter.

A bestiary is just an encyclopedic list of animals, but in antiquity, let’s just say that there wasn’t much emphasis placed on scientific method. But the true purpose of a bestiary wasn’t exactly scientific. Each animal was examined as an illustration of God’s creation and its habits were moralized to teach Christian doctrine. They were used as allegorical illustrations to teach the mysteries of divinity.

The first bestiary in evidence was called the Physiologus, written in Greek, probably around the 2nd to 4th century AD (sources vary). The author of this work drew from numerous sources around the world – “Indian, Hebrew and Egyptian animal lore and various classical natural philosophers like Aristotle and Pliny.” (1)

In the 7th century, a Spanish clergyman named Isidore of Seville (2) wrote another work called the Etymologiae which added to the ground that the original Physiologus covered. He also organized them more efficiently.

Around the 12th century, those two seminal works, plus a few others, combined to make the Bestiary as we understand it today.

Beautifully illustrated, the pictures are frequently inaccurate, even when it comes to creatures we know today. How many English monks had ever really seen a crocodile? They could only draw what they understood from the texts, so it’s hardly a surprise to see a crocodile rendered as a long, dog-shaped beast, or a whale depicted as an oversized, scaly fish.

The illustrations served the purpose of providing a visual lesson to the largely illiterate peasantry as the priest gave a homily on the nature of the divine as found in a pelican or a lion. Sometimes they were also used as simple morality tales. Reynard the Fox (3), the trickster of the Middle Ages, often teaches a lesson.

As this is merely an introduction to a new series of articles, I’ll leave you with some general links to different bestiaries:
The Aberdeen Bestiary
The Ashmole Bestiary
The Harley Bestiary
The Northumberland Bestiary

T.H. White, the English scholar who wrote “The Once and Future King” and other Arthurian tales, also gave us the first English translation of a medieval Bestiary in his book “The Bestiary: A Book of Beasts.”

Next month, we’ll begin our search for some fantastic creatures and the stories behind them.

BTW, a basilisk and a cockatrice are the same thing!
Posted by Sela Carsen at 10:05 AM

For some strange reason, I cannot access White's translation of the Bestiary :sad:

Oh no, Aztec! I have absolutely no suggestions as I am hopelessly computer inept. It's in the University of Wisconsin digital collection. I'd love to get my hands on physical copy -- I want a better look at the illustrations -- but it's nowhere in my library system. I may have to *gasp* spend actual money on it!

Sela, two words (or three letters): interlibrary loan (ILL). Really, you need to check into this.

Ok, you convinced me. I've just ordered it via ILL. Yay!