Holiday Contests and a little Crow...

No need to roast that lucious turkey thawing in my spare fridge. I'm having nice tasty crow for my holiday meal.
:) For the past two years or so, I've been on a rampage. An ANTI-SONY READER campaign.
When the Sony Readers came out a few Christmases ago, my husband braved life and limb to find one for me. It was wonderful. I fell in love with it the first time I held it in my hands. Like all passionate affairs, the initial lust factor lasted a few weeks and then began to settle.
The PRS-500, the first generation model, had flaws. As long as I was reading a book purchased by the Sony store or from a publisher who specifically formmated for the PRS model (Like Samhain Publishing), I was fine. However, books by other publishers and through other retail outlets didn't always wook well. More often than not, those books loaded in sucha tiny font as to be unreadable.
I finally resorted to trying to obtain help from the Sony Customer Support. After two weeks of emails back and forth with suggestions from them, and reports of failure to resolve the issue from me, the Sony Support representative finally sent an email saying they were aware of the problem and regretfully informed me that it would be resolved on the NEXT PRS model. In other words, I was out of luck and they were closing my case.
I was angry. Less than a year into ownership, Sony abandoned me with a critical flaw with my device. I read the books I had already purchased on it, but didn't buy any more. Eventually, the device was put back into its box and put away.
Sony offered to take it back on a trade-in when they came out with the PRS-505, but I was still upset at that point. I didn't want to give them any more money.
The PRS-505, Prs-700, and the next generation - the PRS-300 and PRS-600 - have improved upon the original. Each and every issue I had with my PRS-500 has been resolved and a few extra benefits added.
You can now borrow from your local library. Granted, it's a limited selection; however, it's definitely a start! I'd love to be able to borrow books for my daughter to read without having to drive all over town (or being stuck with them when her interests move on).
They are also now Mac compatible. My PRS-500 doesn't interface with my MacBook and the new firmware update option won't help that hardware problem.
They've changed their digital format to the EPUB standard. No more worries about where to get the titles I'm searching for. No more worries that the publisher my best friend's new release is out with can be read on the device. No more waiting for the Sony site to decide to carry the title I've been waiting for.
They've lowered their device cost. Whereas the first generation device cost $400, the newest generation weighs in at half that with the Pocket Reader's $199. And there's a new trade-in option ($50) for those of us still using the PRS-500 as paperweights.
There is still one major issue with the Sony Readers, but it's really only an issue if you're an international customer - and that includes a service member deployed to an overseas assignment and family members living on military bases abroad. The Sony Store will not sell books to foreign IP addresses. With the new EPUB format, it's not really such an issue because the same digital books carried at the Sony Reader Store (and more besides) are available at other digital retailers.
Anyone know a good seasing for crow? It's certainly beginning to look like I'm going to need it.
:) 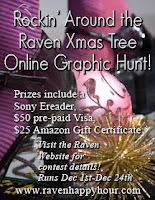 Do you have an ebook reader on your Christmas list? If so, read on!
There's still time to win one! If you've missed it, there are a couple of Find the Graphic Scavenger Hunt contests out there.
The Raven Happy Hour (click to link) is giving away a Sony Pocket Reader, a $50 prepaid Visa, and a $25 Amazon.com giftcard. That's three lucky winners. Come Rock Around the Raven Xmas Tree with 30 great authors.
The Samhellion (click to link) is also having a Find the Graphic contest. There are still two readers to be giving away: 1 Sony Pocket Reader and 1 Kindle 2. One of each has already been given away.
And while you're checking out the Samhellion, look for the free Holiday Themed shorts available for download. Mine will be available on December 26th introducing the characters featured in my March Samhain release, BLOOD AND DESTINY.
Happy Holidays and I hope you get everything your heart asks for.
Posted by Kaye Chambers at 7:10 AM

Kaye, I have the 500, as well - purchased from a friend who upgraded to the Kindle.

I happen to have Acrobat Standard, and by jumping through a few a hoops I could enlarge the font - but lost all the formatting so the book runs all together in one long paragraph. Oh well, can't have everything, but at least I could read it.

Having just gotten an HP netbook for my birthday, my 500 is now on the shelf, as well, and I do all my reading on the netbook using Stanza.