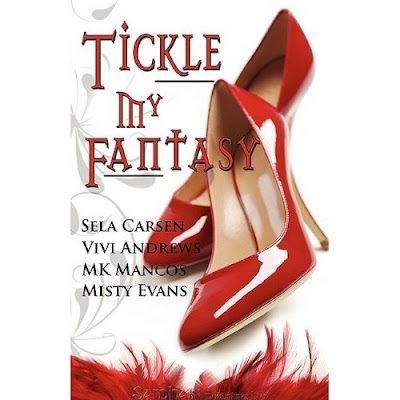 Isn’t it gorgeous? The Tickle My Fantasy anthology is out in print today!!

Go ahead. Try to resist the magic. We dare you!

Carolina Wolf by Sela Carsen (psst! This is me!)
Debra knows that the teensy amount of witchcraft in her veins isn’t worth getting excited about. Yet someone—or something—thinks it’s worth attacking her. Rescuing her seals Maddox’s fate, but only if he can protect her from a rogue of his kind. A werewolf with a nasty streak…and a preference for raw meat.

ParaMatch.com by MK Mancos (hi Kat!)
Even though she lives without a paranormalady, Lucille has managed to carve a niche for herself with a paranormal matchmaking service. Enter Jager, deposed king of the Titans and successful paratrader. She can match anyone, except him. She doesn’t know that he’s out to negotiate the deal of a lifetime—a future with her.

Witches Anonymous by Misty Evans
Amy is done with Devil-worshipping. After swearing an oath never to use magic again, she’s in the market for a normal guy to complement her new lifestyle. And Adam looks like perfect hero material. Lucifer, however, isn’t about to be nice about letting her go…

And Ember's got a sexy holiday story out, too. :)