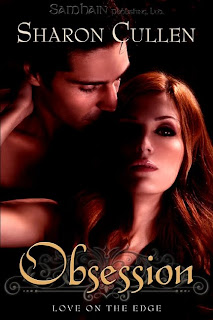 Happy March, everyone! I'm very excited to announce that Obsession, my romantic suspense, is now available in paperback.

eCataromance gave Obsession 5 stars, stating, "Another great book in Ms. Cullen's Love on the Edge series." The Long and the Short Reviews called it, "a winner on all counts".

A killer’s obsession could destroy their second chance for love.

Only a year ago, Officer Alex Juran and his wife Tess had it all. Love, a solid marriage and a baby on the way. Then in one heartbeat they lost everything.

Now, Tess is doing her best to move on. She has a thriving business and while she may be lonely at times, she’s proud of the new life she’s built without Alex.

Two days before their divorce is final, Alex is shot in the line of duty and left for dead. He faces a difficult recovery so Tess finds herself postponing the divorce and offering to care for him until he can live alone again.

At first, cohabitation is little more than combat. Alex’s incapacitating injuries, the looming divorce, and his inability to remember who shot him have him lashing out at the nearest target: Tess. When someone begins stalking her, he suspects his shooter has returned. Convinced that Tess is in danger, Alex becomes desperate to recover his strength.

Because no matter how much she’s hurt him in the past, they’ve been given a second chance—and he’ll do anything to protect his wife.

Read more
Posted by Sharon Cullen at 8:00 AM