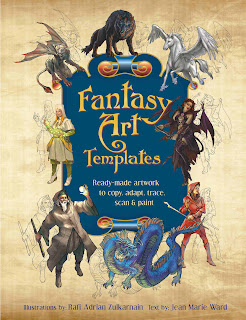 The great thing about writing Fantasy Art Templates, my new book from Barron’s Educational Series, is that it turned out to be more than just another how-to art book. By the time artist Rafi Adrian Zulkarnain and I were done, it had become a 21st century bestiary, a resource for writers and gamers and people who write for games, and (for me, at least) a research project to love.
So in honor of both the release and Thursday, here are thirteen of my new favorite creatures and a few samples of the book’s luscious artwork—not to mention the house I want to live in when I grow up.

Kelpie—Traveling along the rivers and lakes of Scotland, should you ever meet a handsome, tame, but unbridled black horse with water dripping from its mane, do not touch it! Chances are that it is a Kelpie, a carnivorous water horse with an adhesive hide. If you pet the Kelpie or, worse yet, try to ride it, you will be unable to tear yourself free when it plunges into the depths of its watery home. 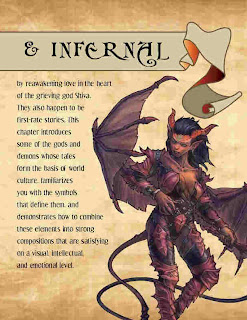 Strigoi—Strigoi are shapeshifting revenants who rise from the dead to plague their former relatives, and commit mischief in the form of cats, bats, owls and other nocturnal animals. (The neat fact we had to cut for length: if a Strigoi manages to evade detection and destruction for seven years he or she can regain their humanity and have children, though they'll all become Strigoi when they die.)

Empusa—The daughter of Hecate, the goddess of sorcery, Empusa is by turns a vampiric seductress, a guardian of crossroads, and the devourer of travelers on the road after dark.

Gyges—Despite his fearsome appearance and fire-spewing belt, Gyges and his fellow Hecatonchires (“hundred-handed ones” in ancient Greek) helped humankind’s protector Zeus in his battle against the Titans. 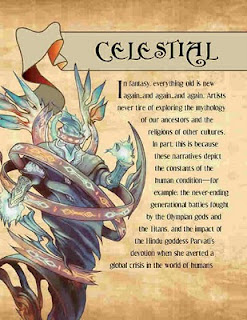 Throne—Wheels within wheels ringed with eyes all around, the angels who supported the chariot in the prophet Ezekiel’s visions were Thrones, the engines of divine justice, which grinds slow but fine.

Kanya—A guardian of wells and streams, this princess of the Naga snake kingdom bestows material and spiritual wealth on those she favors.

Takshaka—Takshaka, the most feared of the three Naga snake kings, embodies all that is dangerous about snakes. He is the sworn enemy of Garuda, the mighty mythical bird upon who the Hindu god Vishnu rides.

Garuda—part man, part eagle, Garuda serves as the Hindu god Vishnu’s mount. This symbol of irresistible force is so large that a grown man could hide between its feathers.

Fenghuang—The Fenghuang was to the empress of China what the dragon was to the emperor –a symbol of strength, virtue and prosperity. Although called the Chinese phoenix, it had nothing to do with fire. Instead, its shape and plumage reflected the most beautiful characteristics of golden pheasants, mandarin ducks, cranes, parrots and peacocks. Ironically, most of these attributes belong to the male of the species, while the Fenghuang is usually considered female.

Leyak—In the folklore of Bali, Leyak is a midwife by day, but after darkness falls, she detaches her head and internal organs from her body to prey on new mothers and infants. 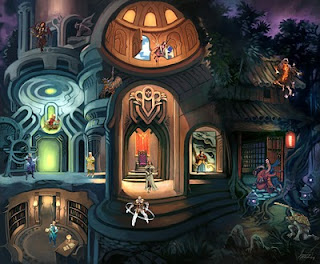 Yuki Onna—The pale, inhumanly beautiful Yuki Onna most often appears in snowstorms. She kills with her freezing breath and floats away without a trace, leaving not even a footprint in the snow.

Kitsune—Kitsune are magical foxes that enjoy human company and often assume our shape—like the Native American shapeshifting shaman Coyote. However, they don’t always remember to hide their bushy tails. In fox form, the relative strength of their elemental power is shown by the number of their tails, with nine tails signifying almost godlike power for good or ill.

Rokurokubi— At night, the seemingly human Rokurokubi gain the ability to stretch their necks and alter their faces. They use these tricks to frighten sleepers, drunks and other “unreliable” witnesses.

It looks like a beautiful book!! I can't wait to get my hands on a copy!

Thanks, Carolan! I'm so pleased with the way it turned out. Cheers and smiles,