Where Have All the Punks Gone? 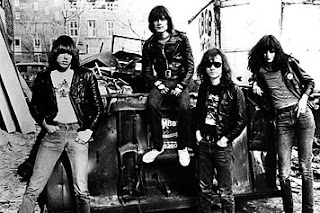 The closing of CBCG signaled the end of an era for the modern punk. In a bitter irony, the old club space has been taken over by men’s fashion designer John Varvatos. Ouch.

But the spirit of the punk lives on, and not just in music. Punk was always about people making their own way, not depending on anyone to do it for them, and a rejection of the commercial. Sometimes that freedom expressed itself in violent, self-destructively anarchic ways, but some of the art and attitudes that sprang from the movement were also mind-blowingly inventive, displaying the DIY ethic that ran deep in Punk's veins.

Two current trends in genre fiction use the ‘punk’ suffix, but they couldn’t be further away from each other in many ways.

Cyberpunk hit the books long before Steampunk, so we’ll start there.

Cyberpunk is dark. There’s no getting around it. It’s the way the Punks of the 20th century – marginalized, alienated, dismissed and rejected – viewed the future. A future often run by corporations, rather than democratically elected governments. A future where we were in the final stages of killing off the Earth, where technology was power.

There’s no beautiful utopian vision of peace and prosperity in cyberpunk, where everyone is equal and no one needs money to get what they need.

No. Cyberpunk is deeply and insidiously dystopian. A future that is grim and gray and violent, ruled by rapacious greed. The protagonists of cyberpunk stories written by Philip K. Dick or William Gibson aren’t what we usually call “heroic” in romance terms, and the endings are rarely happy.

The unfortunately short-lived Shomi line from Kensington (Edit: Jeannie Lin says it was from Dorchester) featured futuristic, cyberpunk plots and settings, but it was difficult to pull off the HEA when each story started in such a dark place. Not that it couldn’t be done, but they weren’t often traditionally feel-good romances. In fact, the HEA element wasn’t even a requirement of the line, which displayed, in my opinion, a real understanding of how cyberpunk worked.

Steampunk, on the other hand, got its name from a play on words by author K.W. Jeter, who thought the Victorian fantasies that he and a few others were writing should have a name that focused on the use of technology, much as cyberpunk focused on it. Hence, the term “Steampunk” was born.

Right off the bat, it’s easy to see that many of the Punk attitudes and philosophies that inspired Cyberpunk weren’t truly evident in its historical counterpart.

And yet… and yet… The Victorian-inspired fantasies and science fiction often make commentary on history’s politics and policies. Slavery, imperialism, the power of the haves over the have-nots, religious, cultural and sexual attitudes are all touched on in Steampunk.

Putting a heroine in a bustle doesn’t make a story Steampunk any more than dressing a hero in a long leather duster makes him a Cyberpunk Neo.

The punk in both movements is deeply embedded in the world that writers build. The Punk ethos of tinkering and DIY is inherent in the way that Victorian technology progressed.

I think where the two sets diverge is primarily in their view of what comes next. The Victorians in general looked forward to a future of great technological advancement and upward mobility of all socio-economic classes, so their “futuristic” fiction was largely optimistic, much in the way that many of our current non-Punk futuristic writers envision the time to come. Not all fluffy bunnies and cotton candy clouds, of course, but a future in which we’re making our world better. Steampunk, then, is more readily optimistic, despite some of the grim literary offerings from William Gibson and others.

Steampunk literature also often tends to branch into the fantastic more easily than Cyberpunk. Victorian science wasn’t strictly opposed to the idea of alchemy or occultism, so adding magical elements to the technology of the day is less far-fetched than might otherwise be thought. After all, Clarke’s 3rd law states “Any sufficiently advanced technology is indistinguishable from magic.”

It’s my personal view that Steampunk is most moving, though, when it’s set in a fully realized world that has the same problems that the protagonists in Cyberpunk face. Political and commercial greed, abuse of power, marginalization of segments of society – problems that are sadly eternal, part of the human condition. When we face those issues, even in our feel-good literature, we can move people to forward progress.

The Ramones are dead, CBCG is gone, but the things that made Punk so powerful live on.
Posted by Sela Carsen at 10:07 AM

That's the best explanation of Steampunk and Cyberpunk I've ever read. Thank you!

I'm more of a cyberpunk than a steampunk. I think the element of hope and happiness in cyberpunk remains an unanswered question. And the genre enforces it as an unanswered question. Where is humanity within this technological and decaying society? So the appeal is the search, not the solution. Of course that leaves you feeling unsettled and unsatisfied, which is not necessarily a bad thing. (was raised Buddhist here -- lots of tolerance for impermanence and unanswered questions) Now how to answer the HEA question in romance while keeping these other questions unanswered, that's kind of tough!

I think you're right. The punks are both searching for those answers in their own way.
They're almost two bookends of the scifi genre -- steampunk going back to the roots of Verne and Wells where all things were possible and the future was open. Cyberpunk sits at the edge of today, not far enough for us to get fantastic slick toys like Star Trek. That would be too easy.

One small correction. Shomi was a Dorchester line.

It seems everyone is taken with Steampunk anew, but Cyberpunk will always have my heart. There's something about the dark future in which there's every reason to give up and yet always that edge of defiance that refuses to do so that calls to me.

I also think that culturally I'm left to always look forward because there's no place for me back. Even the fantasy of Steampunk can't mask that social and cultural divide leave little place for a Black woman as hero. It can be done, but not with the same suspension of belief cyberpunk allows.

Thnaks for the breakdown, I really appreciate and it love that it was so well done. :)

X, I think you've got a point, and one I hadn't previously considered. Maybe a futuristic or off-planet Steampunk setting might work with AA characters, but a historical Steampunk would have bigger cultural issues.

Jeannie, I loves me some good Cyberpunk! Would love to see more with strong heroines. Get to writing! ;)

Loved the way you put this all together!
I do think the "punk" elements in all these genres put them in a dark, dystopian place, but I've found that as long as the characters in the stories can have hope, it doesn't make the story quite as bleak for me, so a qualified HEA can be believable for me.