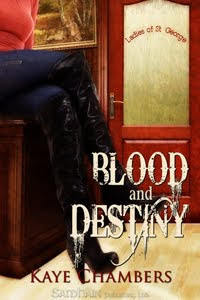 BLOOD AND DESTINY has launched on the world!
It's been a crazy week. The feedback has been kind, generous even. And I keep saying, "Pinch me."
Years ago, I swore I wouldn't write a book featuring a vampire as a primary character. I meant it with every fiber of my being. And when I introduced Marcus into the storyline, he wasn't intended to become the hero of the story. In fact, there wasn't a hero to the story at all.
He had other ideas. When I shared the opening chapter with my critique group, the Cookie Monsters, the general question was, "Does he know he's not a primary character?"
Marcus foiled every attempt I made to phase him into the background. He stubbornly refused to go away! After several revamps of the outline of the story to carry him forward a little bit further, I finally gave up and threw it out. If the blasted vampire wanted to be the hero of the story, then I was just going to have to let him.
Of course, it didn't help that Destiny was in love with the blasted blood-sucking playboy. Not that there isn't a lot to love about him, but it definitely interfered with my plans! And I couldn't be happier.
BLOOD AND DESTINY is close to my heart, not because it's my newest release, but because it is a story that wrote itself. I hope the readers enjoy it as much as I do.
Ohoh, before I skip off to share the blurb and buy link, let me metion that I am celebrating Destiny's release with a contest. The grand prize is a Sony Pocket Reader to be awarded on June 21st. Details can be found on the contest page of my website.
Now for the blurb: When the past bites, bite back.

For Destiny St. George, shapeshifting lioness and private investigator, her best friend’s looming wedding is little more than a reminder of her failed relationship with vampire king Marcus Smythe. Tired of being only one of many mistresses—and dinner entrees—she’s stayed away from the vampire scene altogether. Until a missing-person case forces her to seek his help.

Knowing that pressing Destiny is not the way to convince her to give their relationship another try, Marcus has been waiting her out—and his patience is rewarded when she steps into his nightclub. Now is his chance to lure her back into his arms. This time, he plans to keep her there.

Destiny’s not sure which is worse: working with Marcus, or trying to remember all the reasons she called it off with him. And when it becomes clear the case is an elaborate trap to avenge a millennia-old grudge, she finds herself caught between love and instinct—while the clock ticks down on an innocent victim’s life…

Vampires determined to take more than a bite out of the heroine. A lioness sure that she’s going to have the last word.

Thanks, Liz! It was done by the amazing Natalie Winters. Isn't she awesome?

I love it when a character takes over. It's the moment when you know you're doing something right--even when the little **it is determined to drive you crazy. Go you! Cheers and bestselling wishes, Jean Marie

Thanks Jean Marie! And I agree. I thought Marcus was going to drive me to drink before I threw up my hands and let him have his way.