My weakness for Britcoms 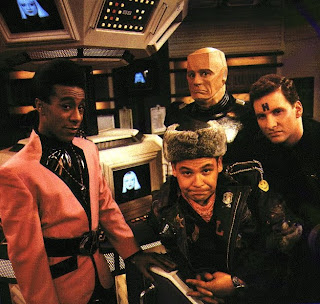 The crew from back to front: Holly (on the screen) Kryten the robot, Arnold the hologram (big H on his head), Dave Lister the last human and Cat.


I blame my father for it, but not that’s it’s something horrible. I’m quite thankful for it. I love British Comedies. Sure, I’m a fan of Dr. Who and Torchwood but that’s a WHOLE separate post.


I grew up watching British comedies like Monty Python, Fawlty Towers and Are You Being Served. It wasn’t until I was much older that I finally understood the many double entendres, including the numerous jokes about Mrs. Slocombe’s pussy.


When I hit my teens I gained my own repertoire of favorite British Comedies, Blackadder, Mr. Bean (though I preferred Blackadder over Mr. Bean, Blackadder was also where I first saw Hugh Laurie and was a fan of his long before House), As Time Goes By (LOVE me some Dame Judi Dench), Vicar of Dibley and my absolute favorite Red Dwarf.


The British have this amazing ability to combine actors and the cast just ‘clicks’. Many people have tried to copy British comedies, but they don’t work.


I am a huge Sci/Fi nut, so Red Dwarf is perfection. It combines my love of Sci/Fi with my love of British Comedy.


Red Dwarf’s humour is basically a lot to do with sexual innuendos. I mean the basic plot is everyone the mining ship Red Dwarf is dead. A radiation leak killed off everyone. Fast forward a million years into deep space and we find one human survived, Dave Lister. He was in stasis. He wakes up to find he is alone, save for a hologram version of his bunk mate Arnold Rimmer whom he HATES and a creature that evolved from his cat who had been safely sealed in the hold and thus safe from the radiation. Also as Dave’s companions are Holly the ship’s computer which has gone a little wonky and Kryton a missih eccentric computer who gets joy out of ironing bras over his head.


The characters feed off each other in their mission to get back to Earth, even though there’s no guarantee the human race have survived.


Basically the plot revolves around Dave Lister getting back to Earth and getting laid. Though his true heart’s desire is Christine Kochanski (who was killed in the radiation leak), but this is Sci/Fi and anything can happen including parallel dimensions and time tears.


At the start of the series Dave is a slob. He’s lazy and basically a bum. Arnold is obsessed with becoming an officer. He’s a brown noser and no one liked him when he was a alive, but during the years this show ran (and still is running I just got to watch Red Dwarf Back to Earth) the characters grow and change…which is what I as a writer strive to do with my own characters.


The only character who doesn’t change is Cat and really he doesn’t need to. He personifies a Cat and he doesn’t need to have furry ears, whiskers or a tail to do it. I get a bit secretly annoyed with shifters or aliens who have these aspects, when all you have to do is show us a bit of his character.


I mean, take a look at Cat in this You Tube video:


Cat has to be one of my favourite characters of all time.


Red Dwarf is my brain candy. It lightens me up when I’m down. Most British Comedies do. They’re my band aid for the soul and I love them.


Do you have any favorite characters or shows which make you feel better?

Should add that Kryten is the mechanoid (robot) not the computer. D'oh.

I was never able to get into British comedies. There's just something lost in translation. I don't know how I managed not to get the bug since my mom loved them, but it just passed me by. Torchwood and Doctor Who on the other hand...*grin*

You know what I love, is the old "As Time Goes By" series with Judi Dench and Geoffrey Palmer. It was funny without being slapstick. Not that I don't love Fawlty Towers and Monty Python (my daughter gave me the entire Flying Circus collection on DVD) but there's something just lovely and charming about "As Time Goes By."

My DH doesn't get Brit coms either, Xakara. He groans when I put them on. :)

Carolan, I heart As Time Goes By. Judi & Geoffrey were well matched. It was witty. I own the entire series on DVD.

Cat! I love that bit! I still treasure the first time I saw him ironing his clothes--while he was still wearing them. :D

YES! That is one of my favorite bits about him.

I also enjoyed when they went to the Backwards Earth and at the very end they realized what Cat was doing in the bushes and he came out with his hair standing on end and said "I don't want to talk about it." LOL!

For British shows I really love Poirot with David Suchet. I really fell in love with Red Dwarf too; I found it at the library. I like some British shows and others I don't. I love Sherlock Holmes with Jeremy Brett. On the other hand, I cannot STAND Mr. Bean. Not sure why. I like some Monty Python, just not all of it (don't tell my husband; he thinks they're fantastic).

And I agree with you, Dame Judi Densch is fantastic. Absolutely inspiring.