Next weekend, Feb. 27-28, is one of my very favorite cons - Celebrate Romance. As always, when J.C. Wilder and I travel anywhere together, the first thing we do is research where the paranormal hot spots are. Let's see what's rattling the pipes in Portland:

Built by Henry Pittock, an influential businessman in the early industrial days of the Pacific Northwest. Pittock was a big supporter of Portland's annual Rose Parade, and visitors to the mansion often report the strong smell of roses, though none kept in the house. A picture of one of his children is said to be moved from place to place. Other experiences include an apparition of an old woman, footsteps, and windows that close and latch themselves.

Situated in an historic building that sits atop Portland's Shanghai Tunnels, a frequent guest in this restaurant is Nina (Nigh-nah). Legend has it that she was a victim of the white slavery market, sold into prostitution. She was was convinced to provide information to traveling missionaries who were trying to clean up the town. She was later found dead in this building, having been thrown down and elevator shaft. She is reportedly friendly to diners. 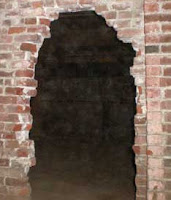 As the name suggests, these tunnels were used to smuggle kidnapped men and women out of the city and into a life of slavery. Victims were often lured to sit in specific locations atop trap doors, then either beaten or drugged before being "disappeared."

If you find yourself near the center of the old campus around 1 a.m., you may hear the screams and yells of an angry mob chasing someone. You might even see apparitions of the mob - and its quarry. (I guess it depends on how many pitchers you've consumed!) 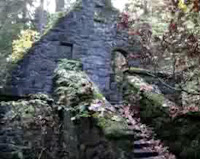 Not actually a castle, but the ruins of a stone house at a crossroads. Reportedly was a trading post owned by the first person legally hanged in Oregon. Tales of "ghost wars" that take place here abound. Not so sure about that, but it's a creepy-cool looking place!

There's much more, but that's about all I have time for today! If you're going to be at CR next week, look me up and we'll take a ghost walk. :)

Wow! Sounds like you and JC are going to have a great time. I was in Portland on business once, but I didn't get the chance to do any of the fun stuff--and I'm a sucker for ghost tours. Enjoy!
Hugs and smiles,
Jean Marie